Lorraine Hansberry’s classic A RAISIN IN THE SUN starts slow and takes a while to get to where it’s going, but the cast at the Arden handles the hefty, far-reaching script with grace and wit. 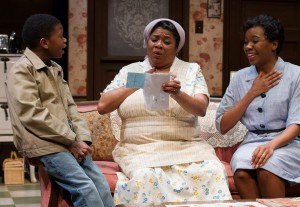 Money is coming to the blue collar Younger family—insurance money, and a lot of it, from a deceased father whom we never see. Everyone has their own intentions for it, but there is much more on the table here, touching on issues of race, education, parenthood, cultural identity, and the dark side of ambition. There’s a lot of ground to cover, but despite the epic run time (two hours and forty-five minutes, with one fifteen minute intermission and one three-minute “interval”) the rewards are high for sinking one’s teeth into this dense narrative.

Intellectual Joseph Asagai (Segun Akande) and rich kid George Murchison (Peterson Townsend) are polar-opposite suitors of unfortunately-named medical student Beneatha Younger (Jaleesa Capri); Akunde and Townsend provide the production’s highlights. We prefer Joseph, but George’s bourgeois cynicism—”You read books—to learn facts—to get grades—to pass the course—to get a degree. That’s all—it has nothing to do with thoughts”—elicits some knowing chuckles from the audience.

To see Raisin done plainly and respectfully—with a remarkable, expansive set by Daniel Conway—is a delight, and though script’s fatal flaw is its attempt to tell too many stories at once (Beneatha alone has enough subplots for her own spin-off), the stories remain compelling in the hands of director Walter Dallas and his actors. George Murchison’s brand of cynicism is just one of many obstacles facing the Younger family, and by the close of the play we want to share in the hope that binds the family together as they start their next chapter. In that vein, the Arden’s production is a success.

One Reply to “A RAISIN IN THE SUN (Arden): A delightful production of a hefty play”