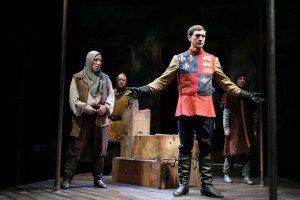 HENRY V completes Shakespeare’s four-part series on Plantagenet kings of England. No longer the indolent partier, Prince Hal has inherited the English throne, but is haunted by the original sin that was his father’s usurping of the crown. A hyperbolic Chorus (Krista Apple-Hodge) introduces the “swelling scene” in which the young king (Ben Dibble) finds himself, as “two mighty monarchies” (France and England) renew a century of warfare.

Scheming bishops hope hostilities with France will distract Henry’s attention from the church; a nefarious French dauphin seeks war for his own ends. Charles McMahon’s direction plays up Henry’s nobility as the king skillfully conducts battles he did not seek. Henry’s merciless threats of rape and murder to the besieged citizens of Harfleur are grandiose, his hasty decision to kill French prisoners on the fields of Agincourt is given scant attention, his mistreatment of erstwhile companions is presented uncritically.

It doesn’t feel like we are so far removed from our recent Iraqi blunder that Shakespeare’s satirizing of “just war” should go unused, and McMahon’s focus robs the text of its humorous dichotomy between the bombastic king and the mocking Pistol (Jake Blouch). But judged by its own intentions the Lantern production is successful if disjointed. Dibble’s Henry is a man for the ages, worthy of acclaim “from this day to the ending of the world”. His Harfleur and St. Crispin’s Day speeches are electrifying and he maintains gravitas throughout. 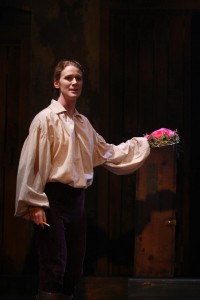 McMahon flags the theatrical pretense of the Chorus role and Apple-Hodge draws us to the action with each appearance. Actors go through pre-show routines as she begins the prologue; costume changes are often full-view. The emphasis on theatrical artifice is wise: each actor in this steady cast takes several roles (no one disappoints).

In the text, Henry is troubled by his kingly role, and the reader—especially those who remember the Prince Hal of the prequels—is unsure what to think of this English monarch. Hagiography is cut with mockery, just as the romantic comedy of Shakespeare’s curious final act is undercut by the poignancy of Henry’s death. For the lives of unblemished leaders are short. March 14 to April 14. lanterntheater.org