In Christina Gesualdi’s too-joyous-to-believe introduction to LOVERTITS, as a woman sighing, giggling, and over-sensing her way through a dozen unfinished sentence, she suggests: “you can just . . . soften your ambition a little bit . . .” Her arms out at either side like a showgirl, she seems completely at her ease while struggling to complete the most simple action. Then, casual as can be, she lifts a trumpet off the stage with her toes. As if it was the most natural . . . 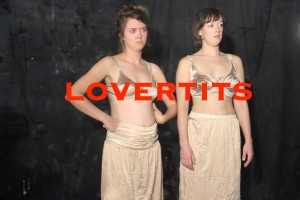 The topic of director/choreographer Annie Wilson’s LOVERTITS, now in its fourth and most sprawling (in length and theme) iteration, is the naked female body. But the bodies are at turns irreverent, nonchalant, non-sexualized. LOVERTITS is cabaret with all the walls knocked down: the circus has been taken over by the acts, which flow into one another with an eye for chaos. Singular characters rise up: the most prudish schoolmarm would have to laugh at Ilse Zoerb’s waddling, boob-eyed MC, so goofy it’s universal. Jenna Horton’s Jenna Ben Franklin, wearing only a frock coat, gives a tour of Philly’s Old City sites across her own body, ending at her own personal Independence Hall. Her incredible commitment suggests: nothing is out of the ordinary here. Then the really weird stuff begins. Adriano Shaplin’s immersive, creeping sound score orchestrates the unpredictable sidestep from pseudo-burlesque into theatrical, alien landscapes—populated by scuttling, murmuring creatures—and back again.