“Hammy, I said—a bit of a ham.” That’s how a character in one of the short scenes that make up POE-A-THON describes the late Edgar Allan P., and the line speaks volumes about the approach taken by William Burrison and the others behind Night Hawks. We have four stories and one “Poe Poetry Experiment” (three Poe poems mashed together), and each is presented with an overwrought verve befitting Poe aficionados. The first three items on the bill are original pieces in a ghoulish vein—first, a cannibalism pact gone awry-ish, then a murder mystery that never goes anywhere, and finally a dream sequence of the late writer on some kind of Stygian trip. Last of all is an adaptation of a Poe piece. 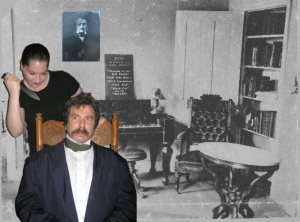 The show itself exists in a kind of confused haze—the members of the ensemble (including Laurence Beck, Marlene Sider, Colin Wolfe, and Wendy Bell) are not really reciting, but certainly not creating a believable world, either. Often, it is hard to tell if they are wearing costumes or not. While there are some moments of fine acting, there is little to differentiate different characters played by the same actors. There’s no suspense, no cultivated anguish, and worst of all, nobody seems to believe in the world they create. With low budget theater-making, the art of suggestion becomes more important than ever, but the actors often simply stare off into nothingness. However, they, and the musicians responsible for the nicely spooky music, do succeed in creating an atmosphere of Victorian creepiness. [The Rotunda] September 21-22, 2014; fringearts.com/poe-a-thon.