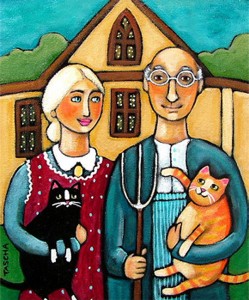 MOUNT AIRY HOME COMPANION borrows more than the title from its public radio namesake. Saint Mad, the Mount Airy-based trumpet-euphonium-guitar-keyboard band behind the show, captures the lovingly corny spirit of Garrison Keillor and company. They have changed the setting from the Midwest down over to northwest Philly, but kept the focus on the folksy and familiar. Unlike episodes of the radio show (and much like the Robert Altman adaptation), the entire performance is one long, convoluted story punctuated by perky musical numbers. And it is loose—almost to the point of being disjointed.

Not all the jokes hit their marks, and a bunch will go over the heads of those unfamiliar with Mount Airy or specific cast members (including a former Ace Award-winning tv host). The blocking is noticeably bad, too, even for a radio show. But they are going for zany, and they get there. If you crave theater where someone gets amnesia from a falling block of tofu, or like the idea of a character called “The Artist Formerly Known as the Prince of Darkness,” or can dig a mash-up of J. Geils, Joan Osborne, and Bob Dylan, then honey, could we ask for more? [The Rotunda] September 18-19, 2014; fringearts.com/mount-airy-home-companion.