Featured previously on Broadway with Robin Williams as the lead role, BENGAL TIGER AT THE BAGHDAD ZOO is performed to standard by Temple Theater members. The play is set entirely in the hellish landscape of war: modern Baghdad, the “place lousy with ghosts”. Fighters, innocents, lepers, and even animals each share their decrepit and miserable stories, all somehow intermixing into one cautionary tale about absence, abuse, and violence. Throughout, the play is ridden with fearful moments, guilty consciences, and serious reflections of what life may be like for creatures being surrounded by uneasiness and pain. 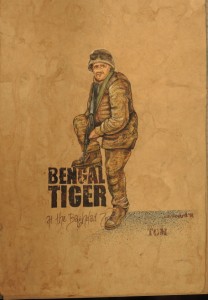 As soldier Tom (Tim Dugan) struggles with the ability to separate civilians from enemies, mistreating his translator and Baghdad native Musa (Ibrahim Miari) many times over, so it is a struggle to find any sort of joy in this play. While Tom battles confusion, sadness, and the never-ending quest to put personal gain before understanding, Alice Gatling as Tiger offers most of the comic relief to this solemn show. Tiger’s seemingly eternal wanderings through Baghdad leave us with the big questions: Why does the universe work in such mysterious ways? Is there a higher purpose, or are we only validated for a short time by being alive? Though it may be a challenge to stay attentive the entire duration of this play, the actors showed great conviction, and the obvious messages are impossible to miss. [Mainstage at the Adrienne, 2030 Sansom St.] September 17-27, 2014; fringearts.com/bengal-tiger-at-the-baghdad-zoo.

Read another Phindie review of BENGAL TIGER AT THE BAGHDAD ZOO.