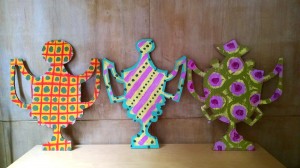 On Monday September 15, 2014, FringeArts was packed with dancers and dance lovers to celebrate the 2013/14 dance season by paying tribute to six individuals and one collaborative team in the annual peer-to-peer Rocky Awards, co-presented by FringeArts and Dance/USA Philadelphia (Dance/UP). Unlike other awards that have a panel of judges or votes by the public, each 2013 recipient has the honor of bestowing a 2014 Rocky to an individual they feel represents the best of Philadelphia dance in the previous season. Past winners can be found at danceUP.org/events/rocky-awards

Da·Da·Dance Project (Eun Jung Cho & Guillermo Ortega Tanus) for their collaboration with choreographer Eric Montes which premiered at Rowan University in February 2014. Presented by Beau Hancock. “Da·Da·Dance is a truly unique company, a partnership in life and work and art, and they seamlessly weave these aspects of their relationship into a functional and productive collaboration.” -Hancock

Julie Diane for who retired this year from the Pennsylvania Ballet. Presented by Lisa Kraus. “The final performance that I saw featured her with husband Zachary Hench in Christopher Wheeldon’s After the Rain in an emotionally rich, physically unadorned and exceptionally moving duet performance.” -Kraus

Hua Hua Zhang for for her performance in Be/Longing: Light and Shadow with Kun-Yang Lin/dancers at the Mandell Theater in March 2014. Presented by Leigh Mumford.

Tony Bobby Rhodes for his performance in Eleone Dance Theatre’s production of Carols in Color. Presented by Roxanne Lyst. “The life and energy he brings to the stage is outstanding.” – Lyst

Annie Wilson, for presenting and curating (along with Susan Rethorst) the Remix Festival. Presented by Shannon Murphy. “To me, this festival was like a bright flower blooming in the middle of a drought. Annie demanded that we as a community continue to build relationships with other artists, see dances in new ways, and come together in support of experiment.  I am proud to pass my Rocky Award on to a woman whose artistic helm reminds me… [of] the power of Philadelphia’s artists.” -Murphy.

The host award was given to Judy Williams for her work at the Performance Garage and for her sustained
support of the Philadelphia dance community going back to the 80s when she was was the Dance Programmer at the Painted Bride Art Center.

New this year was an Audience Appreciation Award, which was given to Robert Oliveti. Bob attends at least one dance event a week and during the busy seasons as many as six.  Some of his favorite performances have been by Brian Sanders, Alie Vidich, Gabrielle Revlock, Tori Lawrence, Kun-Yang Lin and Leah Stein.

Each year, a local artist is commissioned to make the physical awards. The 2014 awards were created by Alexander Stadler (who also owns the boutique Stadler-Kahn at 17th and Sansom Streets). Stadler made large (16×20) brilliantly decorated cardboard cutouts inspired by the work of Betty Woodman (pictured above),