This review is excerpted from Neal’s Paper. Republished by kind permission. 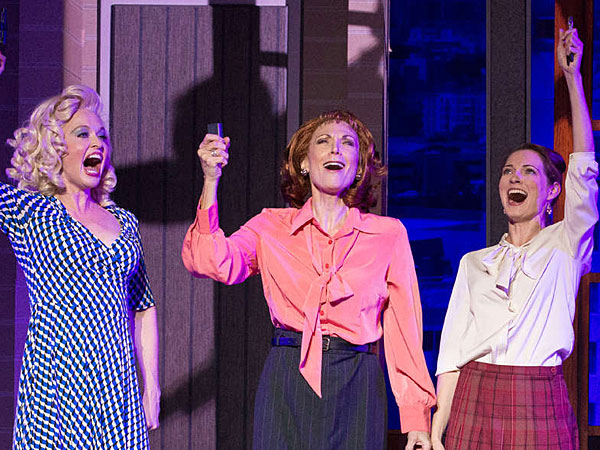 Sharp characterizations by Dee Hoty, Amy Bodnar, and Amanda Rose join with a fireworks explosion of a performance by Mary Martello to keep the Walnut Street Theatre production of Dolly Parton’s 9 TO 5 so consistently entertaining it masks a contrived plot, mediocre music, and lyrics planted so solidly in the middle of the road traffic can pass in either direction with no danger of hitting them.

The plot is familiar to the millions who saw Colin Higgins’s 1980 movie, written by Higgins and Patricia Resnick, who also provided the musical’s book. Three secretaries — It’s 1980, they’re secretaries. — at a large corporation become unhappy with their treatment. During a post-work bonding session that includes joints of “Maui Wowee,” each woman hallucinates how she would kill their mutual boss and reports her method to the others. The day after the pot-induced laughfest, one of the trio believes she has inadvertently put her dream into effect. In the mayhem that follows, the women have a trick played on them by the boss and exact revenge by hogtying him and holding him hostage in his own house.

The premise is clever, but on stage, where the convenience of cutting and showing things from different angles is reduced, the idea becomes more clumsy and even a bit unsavory. Images of the boss, Mr. Hart (Paul Schoeffler), in bondage extend for so long he seems more like a victim than a man receiving deserved comeuppance. Resnick plays at the inequity of working women, but it is approached in a smug and shallow way that invites politically correct response rather than making a salient point.

The majority of Parton’s score is ordinary, typical of the lazy rhymes, dime-thin sentiments, and dull stories that pass for Broadway tunes these days. She writes what I call “declarative songs,” strings of rhyming simple sentences that purport to illuminate a character’s emotions, but come down to a laundry list of hackneyed phrases and greeting-card philosophy.

So, more than most shows, 9 TO 5 is dependent on its actors, and how much they engage you. Bruce Lumpkin’s cast never lets any number flag. As Violet, the ultra-competent office supervisor. Dee Hoty brings her talent and her character’s sensibility to songs, whatever drivel they relate. As Doralee, the Parton surrogate, Amy Bodnar has 9 TO 5’s best song, “Backwoods Barbie,” in which she talks about being a poor, uneducated country girl who develops sophistication and sensibility, along with some physical attributions that garner notice. Amanda Rose strengthens the threesome with her smart portrayal of Judy, who begins the show as a mouse that embarks on her first job ever as she nears age 40, and who cannot tell a copier from a stapler, but develops into a businesswoman with Violet’s toughness and Doralee’s determination.

Paul Schoeffler doesn’t even try to mask Hart’s lustful ways or disdain for women. He makes his character seem out of date even for 1979, but he would be more effective if Hart did not show his chauvinistic stripes so soon or plainly.

A handful of musical numbers that have the wit and drive of Parton’s best work. “Heart to Hart” is one of those good old-fashioned Broadway staples in which a pinched or mousy character lets loose. Mary Martello emerges from a prim, tattle telling office snoop to an untamable force of nature as she tosses aside the de rigueur eyeglasses, undoes the knot of the tie-collar that is part of her blouse, and gyrates suggestively. Martello delights in her invitation to bust out of her character’s close-confining shell.

9 TO 5 benefits from several performances that bring minor characters to vivid and memorable life. Ellie Mooney is hilarious as an office drunk; Ben Dibble dances like a whirlwind in Gaudette’s production numbers yet comes across as an ordinary guy from the office. Even if Mary Martello did not have her breakout number, she would have made comic hay as Hart’s proud and snooty assistant.

Robert Andrew Kovach’s set conveys a corporate office well, although I wonder why the view from company headquarters and Violet’s apartment is the same. Colleen Grady matches costumes to characters perfectly;. Paul Black’s lighting accentuates the fantasy scenes during the pot sequence and adds a touch of comedy in a scene in which Violet is doing some electrical work. Read the full article on nealspaper.com. [Walnut Street Theatre, 9th and Walnut Streets] September 2-October 19, 2014; walnutstreettheatre.org.