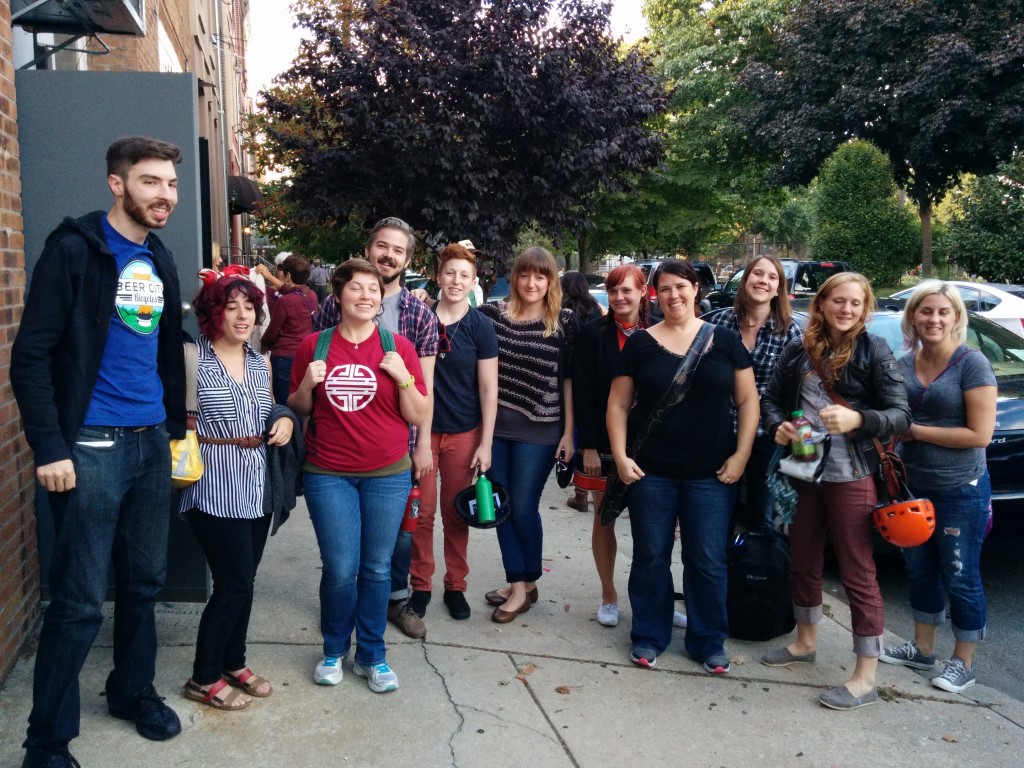 For those of you who don’t know, I (Julius Ferraro, Phindie’s theater editor) ran Phindie’s Official Fringe Bike Tour this past Sunday. It was the first ever bike tour of the Fringe, and I think it was a rousing success.

There’s another tour on Saturday the 20th and it’s not too late to sign up!

All tours are free and you get a free Fringe Membership!

I wanted to write a Bike Tour Diary, which would give an idea about the experience. So here’s that! You’ll have to put up with the crappy photos I took with my Google Nexus 4 and inability to do visual art . . . I think they create a nicely campy vibe to the whole thing.

✓ 12 people signed up
✓ No one got lost, hurt, sued, starved, or otherwise damaged
✓ We got to every show on time

Interesting point: no one saw all three shows on the tour except for me and my girlfriend Leah—everyone else skipped either the first or the last show. Which is fine! You only have to see two shows to experience the tour.

Putting together the tour was a predictably tiresome and anxiety-producing process. It originated easily enough, though. I told Chris Munden, Phindie editor-in-chief, I wanted to run a tour of the Fringe, he was like “Yeah, cool.” Then I called Fringe’s marketing manager Dan Comly, told him about the idea, and was pretty shocked when he was

A) excited about the idea of a bunch of people following me around Philly on bikes
B) not saying the word “liability”
C) happy to give people on the tour a free Fringe membership and 30% off all their tickets. (Effectively making it the cheapest way to get a Fringe membership!) (Wow that’s a great deal, how do I sign up?)

So I did a few things to prepare. I

The Adrienne Theater, with its four stages, central location at 20th and Sansom and affordable rent stands at the heart of Philly’s low-budget theater. It’s become a home for a number of improv groups, not to mention InterAct Theatre Company, and its accessible presence aids the continued existence of many of our homeless, wandering troupes.

Including the well-named Idiopathic Ridiculopathy Consortium, Philly’s “smallest theater company” (their words). The first show on the FIRST EVER BIKE TOUR OF THE PHILLY FRINGE is their production of French absurdist Eugene Ionesco’s Rhinoceros.

I love it when classic troublemakers get redone. Ionesco’s The Bald Soprano is still a cult classic, and Brat Productions frequently does the 24-hour version. But Rhinoceros is a slightly rarer chance to catch the playwright’s more lucid take on the state of the universe.

In Rhinoceros, characters debate philosophy, ethics, love, and reason instead of dealing with a very direct problem: people are turning into pachyderms. The plague sweeps a small French town without any explanation; the play’s excitement lies in the eccentric characters’ emotional capitulations, and the audience is left to ponder explanations on their own.

It’s a thorough delight for me, though Rhinoceros doesn’t please every palate on the tour. Ionesco’s play is long, and wordy, and wonderfully weird. He presents systems of thought in all their sternness, then tickles them until they fall to the ground screaming. Anyone interested in absurdism, or in the struggle between philosophy, logic, reason and reality should buy their ticket now. It’s likely unlike anything else you’ll see in Fringe, both because of the intriguing script, director Tina Brock’s faithful representation of the author’s intentions, and its often brilliant performances.

We leave. “No bathroom breaks!” I cry, leading the charge back to the bikes.

PART 2 and an intermission

“Your little ducks,” Leah says, as we look over our shoulders at the line of weaving their way south on 21st, “they’re all in a row.”

I thought it would be scary to lead cyclists across Philly, but it’s honestly a joyful experience. Everything on the tour is pretty close—I’d spent agonized hours deciding on a tour that made sense in this way—so the trip from Rittenhouse’s Adrienne Theater to South Philly’s Studio X is easy like pie.

Studio X, for those of you who haven’t visited (you haven’t? really?) is the one theatrical rock in the teeming artistic seas of South Philly. Anyone who’s ever checked out the SoLow Fest knows that all the actors on Broad Street and beyond live either in South Philly or Fishtown. But Studio X, positioned in the “cultural hub” of Passyunk Square, is the home of Theatre Exile and the only dedicated theater space in SoPhil.

Exile’s main stage productions feature Philly grit front and center. Philly playwrights can get fully-realized productions with experienced cast and crew, a rare thing; Exile also produces the occasional punchy classic. They’ve been running a New Play Development Series for about five years, but they also rent out their theater space to other companies whenever it’s not in use.

Thus Pantea Productions’ BROKEN WING, the second item on the bike tour and a renter at Studio X. BROKEN WING (you can see my review here) really delights the tour. It’s traditional theater for a general, contemporary audience: beginning, middle and end are clear; the set is opulent and immersive; performances are spot-on; and the political message comes through lucidly. Not my cup of tea—I prefer messier narratives, weird structures, and subtler points, and I have a few other issues with the piece as well.

After, everyone decides they want to eat together. Leah calls Devil’s Den, which is only four blocks away. “We’re almost there—do you have a table for twelve?” They do! Wow. We show up; get seated, fed and boozed in sixty minutes; and leave right on time. Meanwhile, everyone loosens up a bit and starts to talk.

We head out, ten of us (two leave the tour at this point). Though it’s not even eight yet, it’s already dark (ah, fall!). My ducks and I head up girthy eleventh street which narrows at Lombard, are cut off by a block of city work trucks which force us to cross the trolley tracks a few times (sorry, y’all—should have taken you over to 13th!), turn left on Walnut, move slowly through traffic, and arrive at UArts three minutes before showtime. We park our bikes (many of us locking up to one another’s; four or five bikes stacked up, Leah’s glorious solution to the parking problem and a monument to cooperative biking) and rocket up the elevators to the 16th floor: The Caplan Studio, where we see The Body Lautrec.

Lautrec, by Aaron Cromie and Mary Tuomanen (and an intriguing cast of dancers and puppeteers), rounds out our tour. This highly theatrical piece begins with Henri de Toulouse-Lautrec, French post-impressionist famous for his sketches and paintings of early 1900s prostitutes (and his physiological oddities including, most markedly, a fully-formed torso and half-formed legs), passed out blind drunk on the floor. Three women a la gaudy cabaret enter and babble joyfully at him as if to a baby. Lines include the scatological: “Someone’s got a present in his pants for me!” Then a man walks across the stage and they become suddenly dull, leaning against the wall, bored: Lautrec’s prostitutes. They repeat their lines as half-hearted advertisements: “ . . . someone’s got a present in his pants for me . . .”

The piece offers far more than a simple biopic: as its focus shifts across Lautrec’s clownish persona onto the lives and unpleasant deaths of the prostitutes he painted and befriended, it offers a glimpse into the lives of the world’s destitute, in all its gruesome details. It’s funny, too, featuring marvelous theatrical invention and some riotous cabaret numbers. Like Lautrec’s paintings, which portrayed prostitutes in the contexts of their troubling lives (often nude, sometimes sexy, and frequently distraught), The Body Lautrec is both troubling and beautiful.

That’s where the FIRST EVER bike tour of the Fringe ends. We all basically say so long. I originally intended for everyone to grab drinks after, but we’re all exhausted and happy to call it quits. Theater is hard work, a full day of it even more so.

Please check out the schedule for the Saturday Sept. 20th tour here. You can sign up by emailing me here. I hope you’ll join us!

Look out for the Bike Tour Diary pt. 2 next week!

One Reply to “Fringe Bike Tour Was Awesome: Three shows, twelve bikes, dinner, and some rides”