Playwrights are do not come fully formed. Directors have to start somewhere. And the Philly Fringe Festival is traditionally a great place for artists to take their first artistic steps. That said, hopefully the people behind this year’s ALTERNATIVE THEATRE FESTIVAL will move onward and upward, or even just onward. As long as they get as far away as possible from these four short plays. 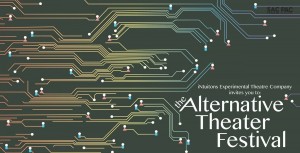 The problem is that none of the plays comes from or tries to create anything real. The authors mistake edgy for deep, and transgressive for thoughtful. The characters exist to be glib line-delivery vehicles, and while there are some good lines to be delivered, they don’t lead anywhere. What conflict comes up dissipates in easy agreement shortly after arising, and doesn’t take the plots anywhere. Worse, the proceedings drip with a faux wisdom that’s equal parts blithe cynicism and unearned world-weariness. If you like shows about how youth suicide is a positive choice, step right up, but otherwise—unless you are friends with the artists—this show will probably leave a weird taste in your mouth. [Platt Student Performing Arts House] September 13, 2014; fringearts.com/alternative-theatre-festival.