Skip to content
Before the curtain rises on MAD BLOOD AND OTHER BEAUTIES, there are signs that this is not a well thought-out production. The premiere is listed as on the 12th, when it’s actually the 13th. Worse, in an email sent out to clarify the actual date, we’re asked to arrive no later than 11:30, but then the lobby doesn’t open until 11:40. And then, once it does, we find a tiny lobby filled with four lines (Four! One for candy and booze, one for tickets, one to like maybe read actors’ bios?, and one to come out the way you came in). This, my friends, looks like a classic clusterfuck. 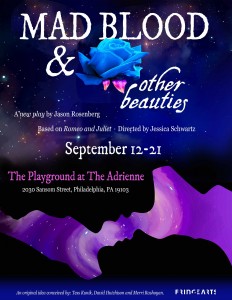 What a wonder, then, to behold the actual show. This is no mere retelling of Romeo and Juliet (if you want that, go watch West Side Story). What we get is a conjuring, a blood-letting, a full-throated cry of rage. Our main star-cross’d lovers are the traditionally background characters Rosaline (Roz) and Valentine (Val), and their courtship is as fraught as that of their more famous fellow Veronesi. Director Jessica Schwartz blends Jason Rosenberg’s artful dialogue with eloquent movement pieces and modern-day music, and maintains a good energy throughout. If you are familiar with the original, this show may be confusing (Benvolio is dead from the get-go?). And Schwartz too often lets a few actors get loud and “Act!” as the play hits its emotional peaks. But I dare you to try tearing your gaze away—bet you can’t. [The PlayGround at the Adrienne] September 12-21, 2014; fringearts.com/mad-blood-and-other-beauties.