A collaboration between three inventive local playwrights (Emily Acker, Emma Goidel, and Douglas Williams), SAFE SPACE provides its audience a Fringe adventure: a choose your own adventure. Six college students meet for a class-assigned Live Action Role Play game set in the aftermath of a climate-change apocalypse (though this hot-button issue is left largely unexplored). Each has adopted a character for the game—there’s Wolverine (Trevor William Fayle), a cowboy (Richard Chan), even Mayor Nutter (Andrew Carroll)—but some find it hard to leave the outside world behind. 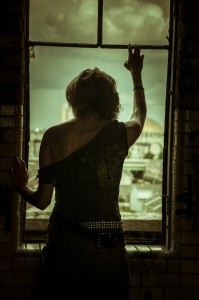 SAFE SPACE occurs in a series of scenes across the third floor of Doug William’s South Philly rowhome. The characters gather periodically to read a new game card, then break out to the balcony, living room or bedroom. The audience is invited to break out with them, following different characters as they navigate the game, form new alliances, and see relationships fray (“real friends aren’t game friends”). The plot is experimental, but the vignettes show strong naturalistic playwriting, with interactions and characters fleshed out in just a few lines. Some scenes are repeated, and director Maura Krause has made the transitions smooth and easy, but it’s impossible to catch all the action. This leaves holes in some character development and plot, but for the most part they are holes we chose: We become closer to some characters than others, gain an understanding of some relationships and not others, and root for some competitors more than others. It’s a wonderfully intimate, immersive theater experience, you don’t want it to end. [Doug’s House, 1930 Latona Street] September 10-19, 2014; fringearts.com/safe-space.