Conversations are not always comfortable.

Thankfully, I’m very seldom shy about them despite that fact.

So began my relationship with Phindie reviewer Christopher Munden. You see, it’s not usually acceptable to write impassioned emails arguing against word choice in a review about your own Fringe show. Most industry professionals would advise against it.

I think I may have a bad habit of starting conversations others would advise against.

But this time, the word choice didn’t affect me as a performer, or even the show, and the review was, as it stood, still a very good one. The word choice affected my moral compass in regards to the show’s mission. You see, in the original article, Mr. Munden posited that I “seemed” to begin telling my own story near the end of the piece, and that, at first glimpse, that move may appear “self-centered.”

I was taken aback, perhaps more by the murkiness of all of those suppositions than anything else, and so set to writing a response. I am passionate but I try to be fair so I asked: why exactly was it appropriate to describe the sharing of private, traumatic stories as self-centered? Even with counter-balance in the same sentence, it was an off-putting word.

Also, I argued that it was not so thoughtful to guess at ownership of stories in a show concerning intimate partner violence, for moral reasons as well as practical (the women’s safety from abusers who may or may not still be in their lives to some extent). Those interviewed only agreed because of their anonymity—even if you are trying to guess that a story was mine, it’s a slippery slope that I am wary of people taking.

And so, I clicked “send” in Gmail, and then set to stress mode while awaiting a response.

And then this amazing thing happened that honestly usually happens when I start a scary conversation that I’m not supposed to start. Munden was open, and very thoughtful, about the whole thing. He mentioned that he had actually struggled with his word choice, and what a good reminder it was that his writing mattered and affected real people’s work and experience (a refreshing POV in the world of insta-click viral videos). He went so far as to adjust the sentence to reflect his perspective more clearly, as you can read now in the review as it is published.

I would have been satisfied had it stopped there, but we were both open to discussing the show and his response further, and planned to meet for coffee. Conversation in person is always more engaging and meaningful and surprising than it could ever be in any forum in which you have time to think and form sentences precisely the way you want them to look. (I have a feeling if I were recounting this story in person to you, you’d be much more engaged. I could repeat words and use bad grammar! It’s much more fun.) 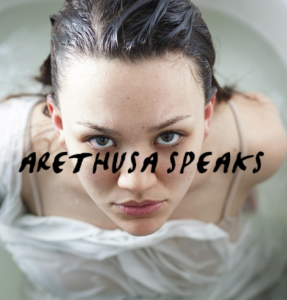 The conversation that followed two days later over coffee explored the ins and outs of the legacy of misogyny, intimate partner violence in current events, our avoidance of the reality of violence (meat eating and foreign wars were compared), and theater’s place in beginning to change that. We ended our own conversation on the topic of conversation—and how they, on a very simple level, are the most powerful tool we have for affecting change.

The conversation allowed me to invest once again in the idea that the essence of my mission for They Call Me Arethusa (and the theater company behind it, Arethusa Speaks) is to begin conversations not unlike these. I want for people to think more deeply than they otherwise would about the issue of violence against women. I want people to have their assumptions challenged, and I want them to continue to question those assumptions.

The more I have them, the more I understand that hard conversations have a way of turning into meaningful action. Sharing knowledge is our greatest tool for empowerment, in any situation, but for me this is especially purposed for those who are survivors of violence and their allies.

Until we bravely begin to start more of these conversations, shame will continue to creep in the corners of abuse. It will continue to claim thousands of women as its victims each year. And, tragically, They Call Me Arethusa will stay relevant.

I work for the day when it’s not.

They Call Me Arethusa runs September 5-20, 2014, as part of the 2014 Philadelphia Fringe Festival for tickets visit fringearts.com/they-call-me-arethusa..