Coming to the Philadelphia Fringe Festival after much acclaim at Prague Fringe and FringeNYC, HUMAN FRUIT BOWL draws audience members into the mind of nude model Beth (Harmony Stempel). Speaking of her own nudity and other ponderings, Beth’s eyes flicker around the audience, careful and confident in the complete stillness of the rest of her body. Blending entertaining banter with the cyclical naming of iconic artists and their little known muses, she repeatedly brings attention to the silence and mystery surrounding nude models in western art. 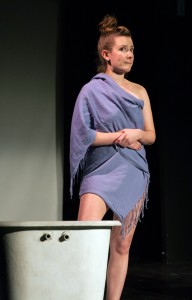 With paper, pencils, and an open bar, Voyeur nightclub encourages attendees to draw as they witness an open depiction of the model as an aware and vocal object of the artist. HUMAN FRUIT BOWL explores how this static role butts up against the living, breathing human who is asked to stand, sit, and lean there. Through her own investigation, the model questions the legacy of the models who have come before her and her fate as determined by those, either artists or audience members, who hold her in their gaze. Repeating the names of artists and their objects of attention, the naked actress as nude model ponders how often the muse herself is remembered, how often we research facts, and the ease with which many take one person’s perspective for granted as truth. Head to Voyeur Nightclub, and see for yourself. [Voyeur Nightclub] September 7-21, 2014; fringearts.com/human-fruit-bowl.