Trajal Harrell’s TWENTY LOOKS comes in a selection of lengths and sizes, and although the Presented Fringe version of his solo show runs extra small, at a mere 25 minutes to a 25-person audience (hence the XS in the extended title), you will be reminded that good things come in small packages; this is an exquisite little gem. After welcoming each attendee individually into the house and giving a personal introduction to his original work (while sitting on the floor with the audience), the soft-spoken dancer/choreographer performed his intimate solo piece in near darkness (lighting by Stefané Perraud), creating a bittersweet mood of mystery, secrecy, and vulnerability. 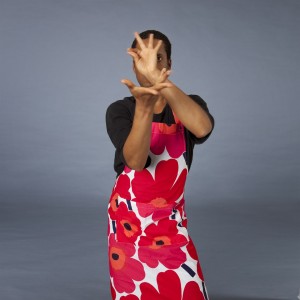 Fusing the styles of such seminal post-modern luminaries of minimalist conceptualism as Lucinda Childs and Yvonne Rainer (of the Judson Dance Theater at Judson Memorial Church in the 1960s) with the little-known African-American, Latino, gay, and transgendered fashionistas of the Harlem drag-ball Voguing culture of the 1980s (documented in Jennie Livingston’s1990 film Paris Is Burning), Harrell’s fluid, subtle moves capture the look and feel, the surface and souls, of those two different worlds. In so doing, he pays homage to New York’s creative pioneers who’ve had a lasting impact on bringing alternative movements and disenfranchised communities into the spotlight. And he does it all with the unspeakably beautiful grace, delicacy, and melancholy of a fragile bird—gloriously plumed on the outside, but easily broken on the inside. The poignancy of this XS is XL. [FringeArts, 140 N. Columbus Blvd.] September 9, 2014; http://fringearts.com/event/twenty-looks-or-paris-is-burning-at-the-judson-church-xs-3/.