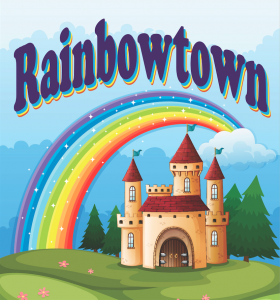 Two Ducks Theatre Company is making their debut with this year’s Fringe Festival. The self-described “fledgling” company, dedicated to make quality shows for kids and their families, premieres with a peppy all-ages production about the importance of emotional balance called RAINBOWTOWN. This short musical is aimed at really young ones, but its message (and its sense of humor) is universal. Two actors and one musician run through a simple story, and model a gamut of moods and behaviors for their young audience. Queen Annie (the captivating Amanda Curry) is on a journey to find a new place to build her castle. She visits a series of emotionally-themed towns and connects with a local resident in each. The residents are played by the perfectly clownish Victoria Rose, who breathes individual life into each of them.

The story unfolds in a gently didactic manner, with frequent addresses to the audience and a lot of physically-embodied emotion. Singing and movement and audience interaction keep the tone light and airy, and when all the parts click, the show takes off. [Radnor United Methodist Church, 930 Conestoga Road, Rosemont] September 6-20, 2014; http://fringearts.com/event/rainbowtown.