It’s striking to think so many stories of classical mythology contain violence against women. In THEY CALL ME ARETHUSA, Colie McClellan weaves reinterpretations of the tales of Persephone, Medusa, Arethusa, and others among true accounts by modern-day women of “Intimate Partner Terrorism”: control over a relationship manifested in violence and other tactics of domination. Transferring these Greek myths into drawled Southern folklore (Athens is Athens, GA), McClellan invites us to reconnect with and reinterpret the familiar tales (“they say ‘Beware Medusa, slayer of men’. I say ‘Beware men, slayer of Medusa.'”) 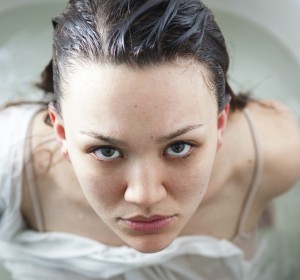 The myths tie together documentary theater-style interviews reminiscent of Anna Deavere Smith’s one-woman shows. Like Smith, McClellan acts out real-life interviews to create an evocative sum-of-parts story. Though less successful than Smith at capturing the differentiating intricacies of each character, She and coproducer Mark Kennedy have tackled an age-old-yet-hot-topic issue without being didactic or unreflecting. (THEY CALL ME ARETHUSA makes a good companion piece to another Fringe show, PAC’s The Rape of Lucrece.) Toward the end, one has the troubling thought that some of stories McClellan tells may be her own, a testament to both her acting ability and the personal nature of the piece. No person’s experiences can serve to represent this entire millenia-old cultural issue, but in THEY CALL ME ARETHUSA, sadly, they do. [Pig Iron School Studio One, 1417 North 2nd Street] September 5-20, 2014; fringearts.com/event/they-call-me-arethusa.