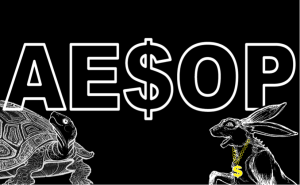 “Slow and steady wins the race” maybe was a fitting message for 5th-century BCE Greece, but in the corporate world, the hare always trumps the tortoise. This is the message The Drexel Players bring us with their adaptation of Aesop’s fables, AE$OP. The play turns the animals in Aesop’s fables into various employees in a snack food corporation, Jumanji Crackers. AE$OP portrays the power struggles and greed between figures like CEO Helen Leo, the General Manager Tim Burrs Woolf, Marketing Director Victoria Fawkes, and HR director Eeyur Mueller. Narrating this 21st-century fable is Jumanji Cracker’s intern, Aesop.

AE$OP re-hashes the fables’ warnings concerning might and deception, but subverts others for our society in which money speaks the loudest. This clever piece challenges audiences to face the lack of morality and power-plays in which we all participate in order to advance in our careers, or to keep our wallets full. Most prominently appearing in AE$OP was Dana Marcus, who played Fawkes and IRS auditor Ana Conda. Under the direction of Claire Moyer, the play unfolds in a space recalling both a jungle and an office. No other scenic design would do better than this – because as AE$OP warns, we’re all simply animals. [URBN Annex Black Box Theater] September 5-14, 2014, fringearts.com/event/aeop-09-05-14/.