As indicated by Phindie’s 2014 Critics’ Awards, the Philadelphia Artists’ Collective is one of the most consistently excellent independent theater companies in the city. Their last few shows (Creditors [Fringe 2012], Timon of Athens, The Sea Plays [Fringe 2013], Mary Stuart) have displayed well-directed ensemble interplay. This years’ Fringe outing marks a change of pace, as founder Dan Hodge presents a surprisingly accessible one-man adaptation of Shakespeare’s poem THE RAPE OF LUCRECE. 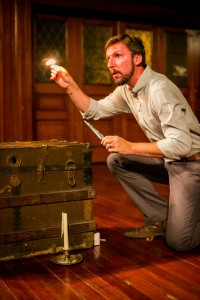 The poem tells the story of Tarquin, heir to the last king of Rome, who brought about the fall of the centuries-old monarchy and the establishment of the Roman Republic by his rape of Lucrece, chaste wife of an aristocratic friend. Hodge successfully communicates the story contained within the dense verse, providing an introduction to ease us into the poem; varying his tone, volume, and pace with the mood of each line; using expressive visual cues; and giving each character a voice and depth. (Though the lines of the wronged Lucrece play up her distress and the expense of her strength of will.) Several lines are almost breathtaking in their beauty and insight.

Then where is truth, if there be no self-trust?
When shall he think to find a stranger just,
When he himself himself confounds, betrays
To slanderous tongues and wretched hateful days?

With Tarquin, Shakespeare shows that man’s evil side is as solidly human as his loving side. Hodge captures this humanity of the characters along with the beauty of the verse.  His adaptation is a Fringe treat.

Read another Phindie review of THE RAPE OF LUCRECE.