Theater writer Jessica Foley is seeing 20 Fringe plays in 20 days. Why is she starting with Ionesco’s Rhinoceros? Reprinted from Foley Got Comped. 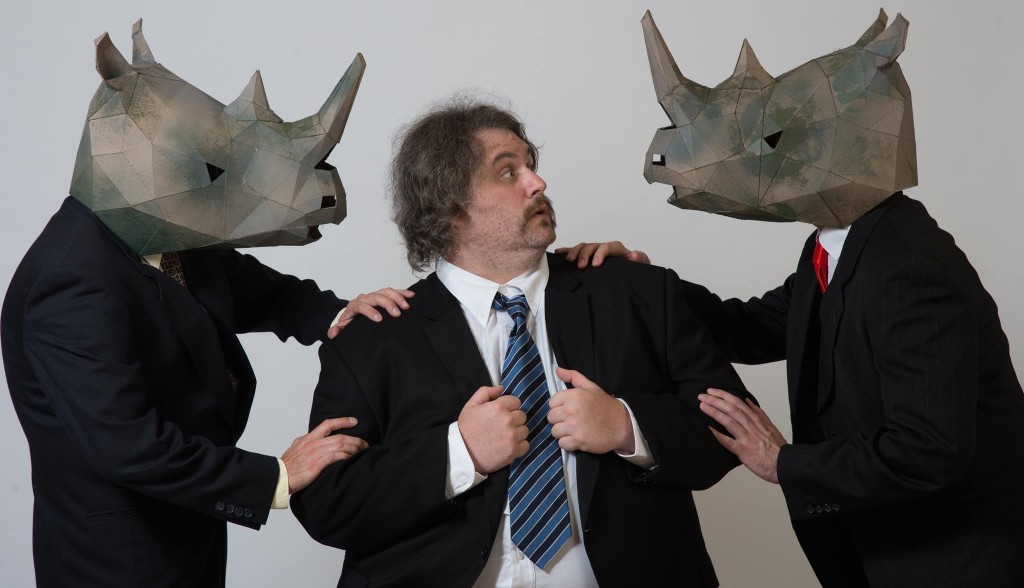 Why is IRC’s Rhino at the tip-top of my list?

30-seconds into the first scene during an evening rehearsal at the Arts Parlor on South Broad Street, IRC’s director, Tina Brock, standing on the seat of her chair cheering “Go, go, go, go, go!“ to her ensemble of ten actors as they feverishly bandy Ionesco’s words around the room at a break-neck speed.

Of course it was Eugene Ionesco, the playwright, deemed the “Inventor of the Metaphysical Farce” and “Shakespeare of the Absurd”, who said: “We have not the time to take our time.” (Although, I highly recommend you take the time to see this IRC-production.)

During a short five-minute break, actor, IRC Company member, Tomas Dura, who plays three roles The Grocer’s Wife, Second Fireman, and The Old Woman. reveals what it feels like to actually be in this Ionesco play: “This play might be called Rhinoceros, but it moves like a caterpillar. Sometimes two, or three of us are all speaking at the same time, but if one person forgets or drops a line than the entire play tumbles down.”

Two seconds before the 5-minute break ends, actor, Jerry Rudasill who plays The Waitress, and Mr. Papillion, rushes over to whisper in my ear: “Ionesco hated actors.”

After rehearsal was over, and the actors all went home for the night, director, Tina Brock clarifies: “No, Ionesco didn’t hate actors. He hated watching the traditional representational theater like the plays of Moliere, or the presentational plays of Brecht. He found it all to be impoverished or empty. He preferred the immediacy of sports or Punch & Judy- puppet shows. To Ionesco, theater was a sport.”

In my humble opinion, the only way to properly plunge into the Philadelphia 2014 Fringe festival is jump in head first with Ionesco’s Rhinoceros.

When your hairstylist sits you in her swivel chair, takes out her scissor-shears and asks: “How about a little fringe?” Of course she/he is really asking: “Do you want bangs to cover up your forehead?”

Merriam-Webster defines the word Fringe as: “1) an area of activity that is related to but not part of whatever is central or most widely accepted.”

The Fringe is where Ionesco and his characters exist.

Or don’t see it. The choice is yours.