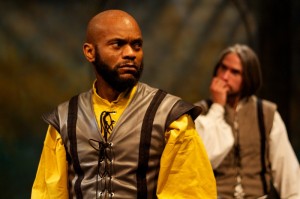 In most of Shakespeare’s tragedies, the characters are overtaken by the swirl of events, following fate to their bloody end. A notable exception is OTHELLO, now onstage at Philadelphia Shakespeare Theatre. The villainous Iago (J Hernandez) drives the action, snaring noble Othello (Forrest McClendon) in a web of deceit. A strong production relies on a outstanding performances by the two leads. Hernandez and McClendon deliver. Hernandez shuns the wit and language-play seen in some of the best Iagos, but controls the play with an engaging intensity—his is a thoroughly convincing villain. McClendon is superb: anger, jealousy, and desperation bubbling through the clearly spoken language without washing away the Moor’s gravitas. The rest of the cast struggle to match their performances, but succeed en mass in a thoroughly satisfying second act.

Last season’s TITUS ANDRONICUS disappointed in a wash of puppetry, a shame because the villain Aaron is Iago’s only equal in the Bard’s canon. OTHELLO provides welcome redemption. March 13 – May 18, 2013. phillyshakespeare.org.