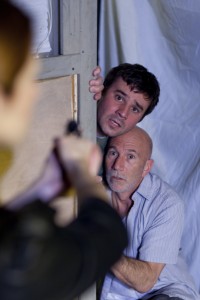 Not a lot has changed since last time Walking Fish Theatre checked into George F. Walker’s Suburban Motel, for November’s PROBLEM CHILD. The room is still grotty, the management is drunk; the guests are losers, their lives are a series of unfortunate events.

This visit is the fourth in B. Someday Productions’ presentation of all six of Walker’s interlinked one acts set in the same motel room. CRIMINAL GENIUS finds father-son crime duo Rolly (Lou Seitchik) and Stevie (Peter Zeilinski) in the middle of as bungled arson job for dominating boss Shirley (Sarah Robinson).

Seitchik and Zeilinski have real chemistry, and their interactions are among the production’s highlights, as when Rolly attempts to comfort his son, assuring him he won’t be to blame for their misdoings:

ROLLY: They think you’re just a moron.
STEVIE: Why would they think that?
ROLLY: Because that’s what I told them.

The pair’s criminal career has always suffered from an unwillingness to commit acts of violence. This dubious moral code, boosted and complicated by Rolly’s newfound love of self-help articles, has not prevented them from kidnapping local crime-boss scion Amanda Castle (Gina Martino, in a versatile fourth appearance at the motel). When Amanda escapes with Stevie and enacts her own revenge on her murderous father, things go from bad to worse for the hapless criminals.

“I feel like a victim,” Rolly laments, blind to his own role. “When was the last time I did something and got away with it?”Director Stan Heleva keeps the production on an amped-up intensity. The constant shouting wears, but the high-octane approach keeps the pacing moving, the one-liners coming (“bad luck loves me like I’m his mother”), and the entertainment level high. Where PROBLEM CHILD struck a perfect balance between Walker’s pulp and emotional insight and last June’s THE END OF CIVILIZATION overreached for profundity, CRIMINAL GENIUS succeeds as unselfconscious fun.

Thanks to Walking Fish for presenting this series as a whole. Here’s looking forward to the next stay.