Philadelphia’s annual Fringe Festival was inspired by the long-running event in Edinburgh, Scotland. It’s huge: over 3,000 shows (including over 1,000 world premieres and 900 theater shows) selling about two million tickets every year. 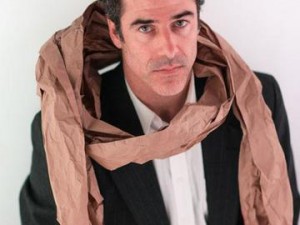 Each year, a few entrants from the Philadelphia Fringe try their luck over in Edinburgh. In 2014, Scottish Fringe audiences were treated to Chris Davis’s Drunk Lion and The Berserker Residents’ The Talkback. One Philadelphia-born show, Geoff Sobelle’s The Object Lesson, was a particular hit. The piece, which premiered at the 2013 Philadelphia Fringe Festival, is the winner of the 2014 Carol Tambor Best of Edinburgh award, presented annually to an original show that received 4-star or 5-star reviews in The Scotsman and has never been produced in New York City.

Reviewing for Phindie, Julius Ferraro wrote “The Object Lesson explores the way that objects define, limit, or grow us. At the same time it is a magic act, with the silliness and self-deprecation of a Woody Allen movie and the slapstick and sarcasm of a Groucho Marx act.”

Praising the “inexplicable magic,” Kathryn Osenlund called it “the product of a subtle and ingenious mind” in her Phindie review. “Even as Sobelle locates remembrance in stored away treasures and junk, he subverts the show with shifts in focus and gentle deception.”

British audiences were are won over. The Scotsman said “The emotions we attach to inanimate objects are ingeniously explored in actor-illusionist-inventor Geoff Sobelle’s immersive show,”  The Guardian called the show “a hugely enjoyable, highly intelligent, ultra-connected meditation on our attachment to the past – old things and emotions, maybe even friendships, that we don’t actually need.”

American audiences will have another chance to see The Object Lesson: It plays in New York City November 5-8, 2014 as part of the annual Next Wave Festival at the Brooklyn Academy of Music.

Meanwhile, the Philadelphia Fringe Festival runs September 5-21, 2014, at sites around Philadelphia. What will be the international hit this year? fringearts.com.