In shooting YOU KNOW MY NAME: A DANIEL TALBOTT TRIO, I wanted to capture not only the unique world in which Talbott’s plays occur, but the very different worlds of these three short plays.  A kitchen (Break My Face on Your Hand), a public bench (You Know My Name), and a bedroom (What Happened When) become joyous, sinister, hopeful, despairing, or reassuring places as the plays move along and flow into one another.

Set designer Joseph Napolitano has created these amazing moving walls that simultaneously unify the three plays and separate them into distinctive worlds, and I wanted to capture both what remains and what changes. All three of the plays move between bleakness and hope, and I also wanted to show this movement. In addition, the first play, Break My Face on Your Hand, has very different looks to the various scenes, despite the fact that it’s basically a one-set piece, and to do that play justice I had to capture these various looks. Eric Baker’s lighting is stunning, and I made use of the ambient stage lighting, which so successfully sets the mood of each play, or each scene within a play. I didn’t bring any additional lights, as they weren’t needed, and Baker’s lighting so conveys the plays’ moods that I wanted to capture the design rather than interfere with it.

This is the fourth time I’ve photographed Daniel Talbott plays for Quince, as he’s been represented in all four years of GayFest!. There’s always a unique feel to the setting, character, and actions in one of his shows that can be a challenge to adequately put across: how do I show the densely poetic language and rich landscape of relationships that this amazing writer produces? In spite of what might seem a starkness of setting, it was important to me to show viewers that there is, in fact, a great deal of humor—moments I’d almost call high comedy (it’s not easy to photograph while laughing out loud). In addition to my 50mm f/1.4 lens, I have added a 35mm f/2.0D lens to my kit to capture wider shots under dim lighting conditions. Shooting with my Nikon D600 camera, I traveled around the stage and audience as the action unfolded; since much of the action is stationary, it was the photographer doing the traveling, for the most part, rather than the actors. In this way I could capture a variety of angles and see how the light hit them in different ways. I especially appreciated the graphic quality the lights gave to Calvin Atkinson during the dance sequences. 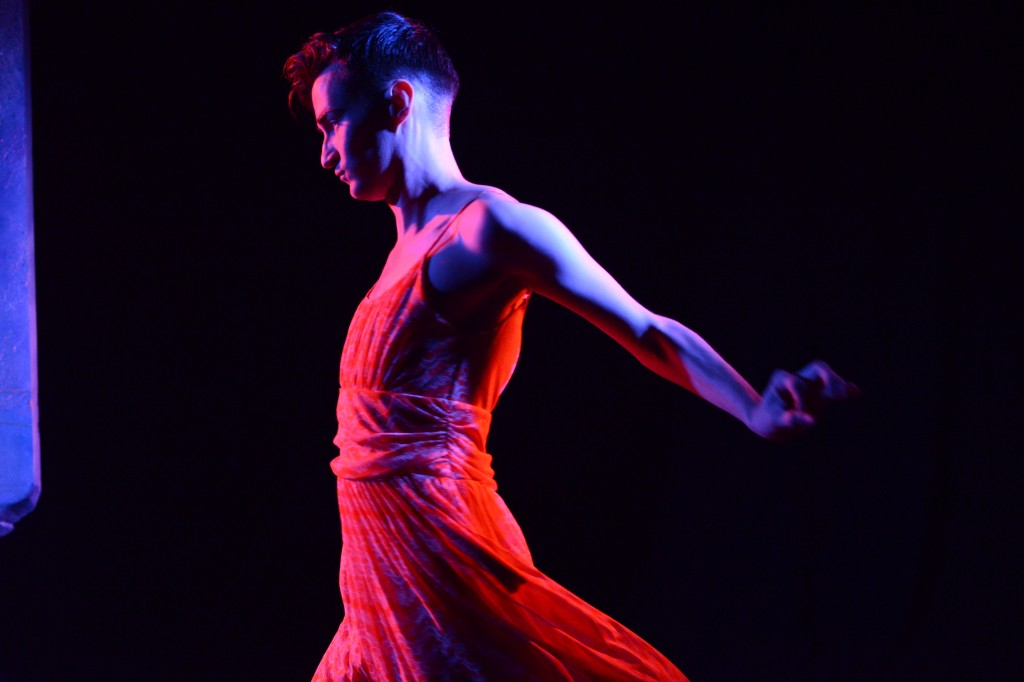 This shot of Calvin Atkinson is all about light and character. And motion—more than anything, motion. 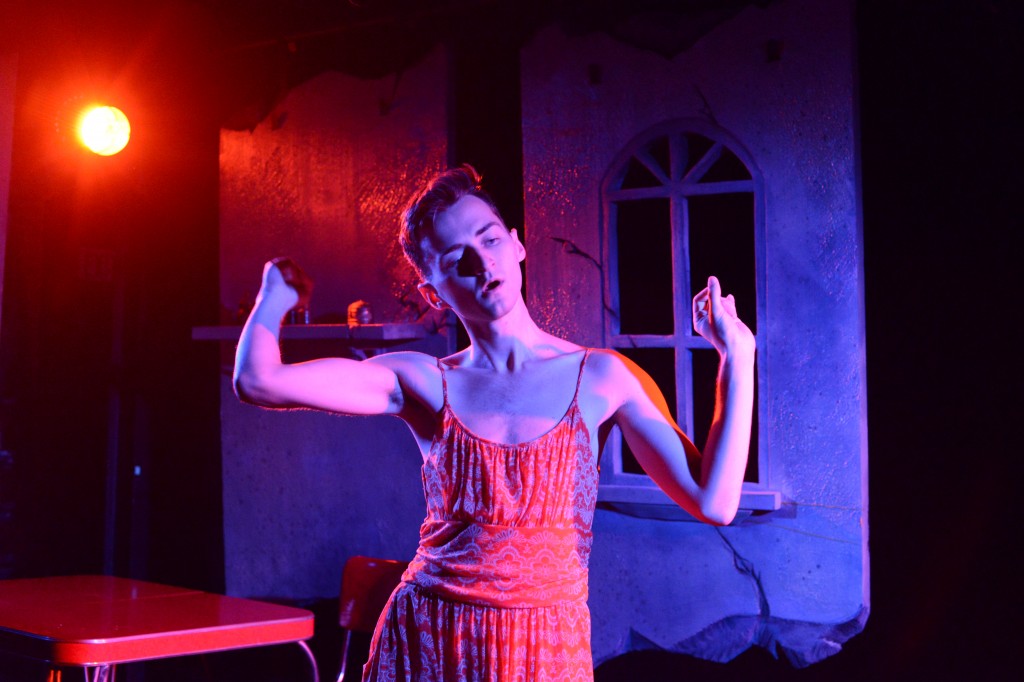 I love the way the stage light appears like a sun casting its light upon the character’s dance, and how the light picks up some of the texture of Napolitano’s walls. 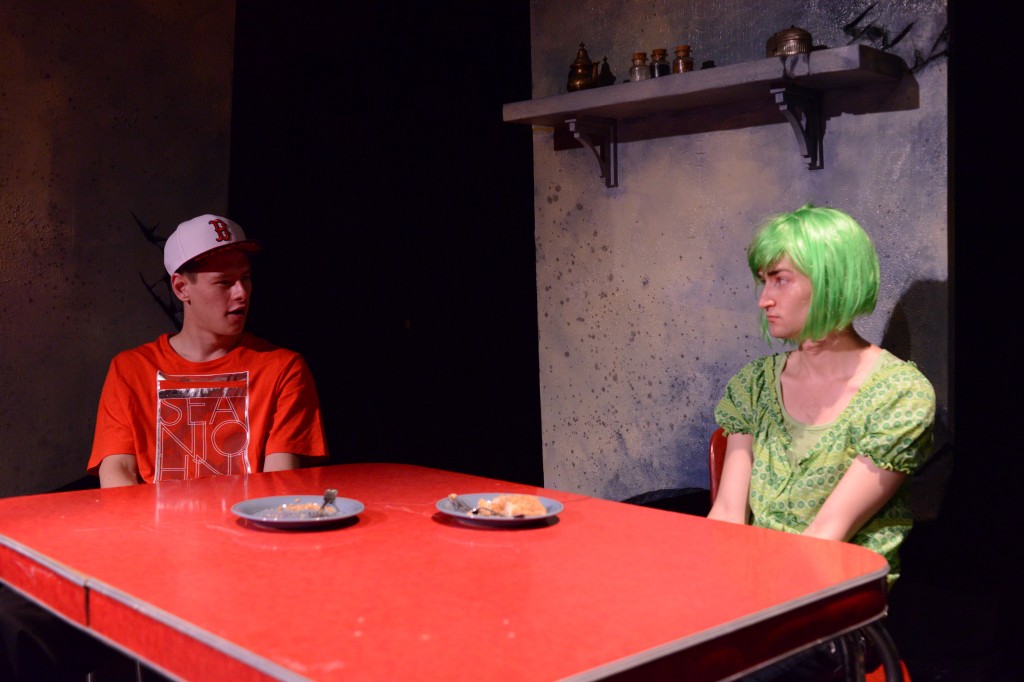 A green wig, two pieces of pie, and a very dubious jock. This pretty much sums up Break My Face on Your Hand for me! 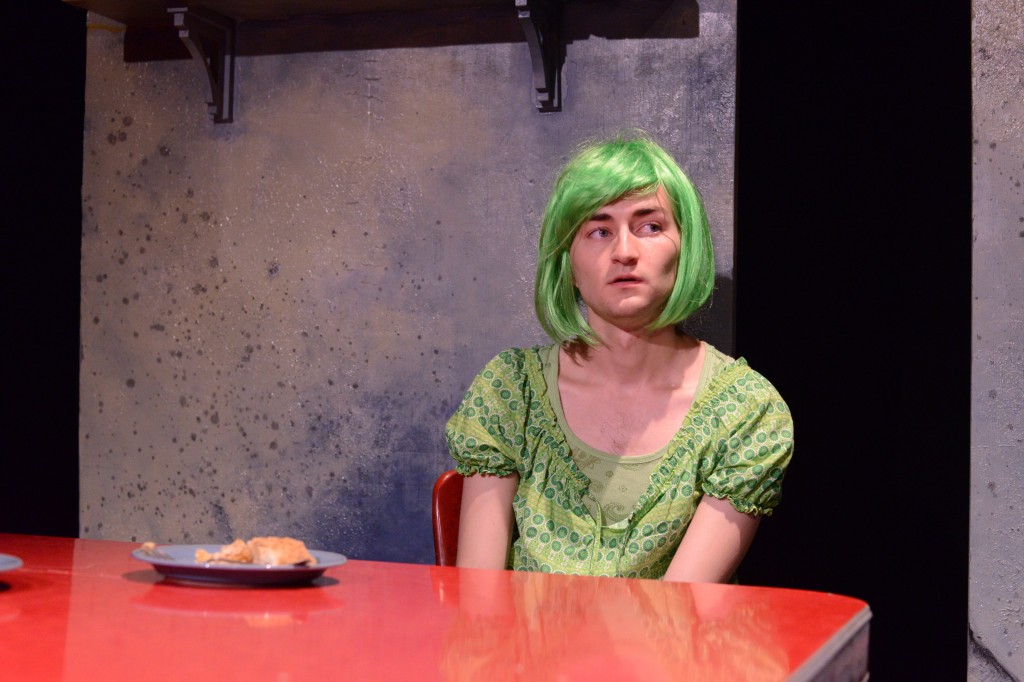 This one is so full of character, and I like the way the walls in the background lend an extra layer of interest. It’s one of those “what the hell is happening here?” photos that so nicely captures the mood of the plays. 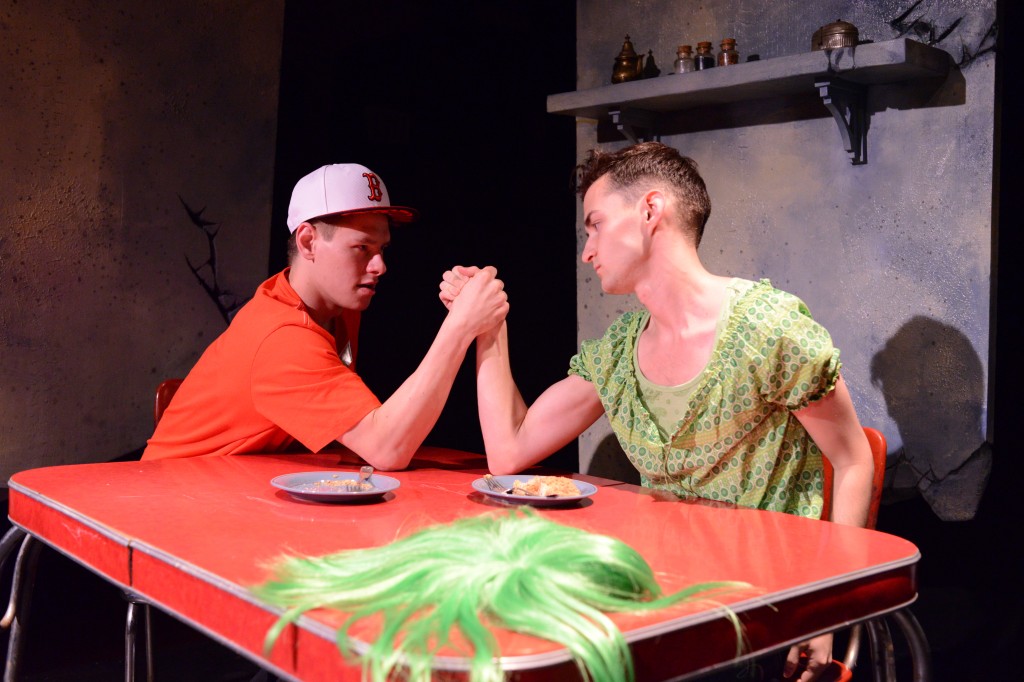 The green wig in the foreground, the mostly-eaten plates of pie, the oddly intense arm-wrestling: this shot appeals to me because something’s happening in all areas of the image. 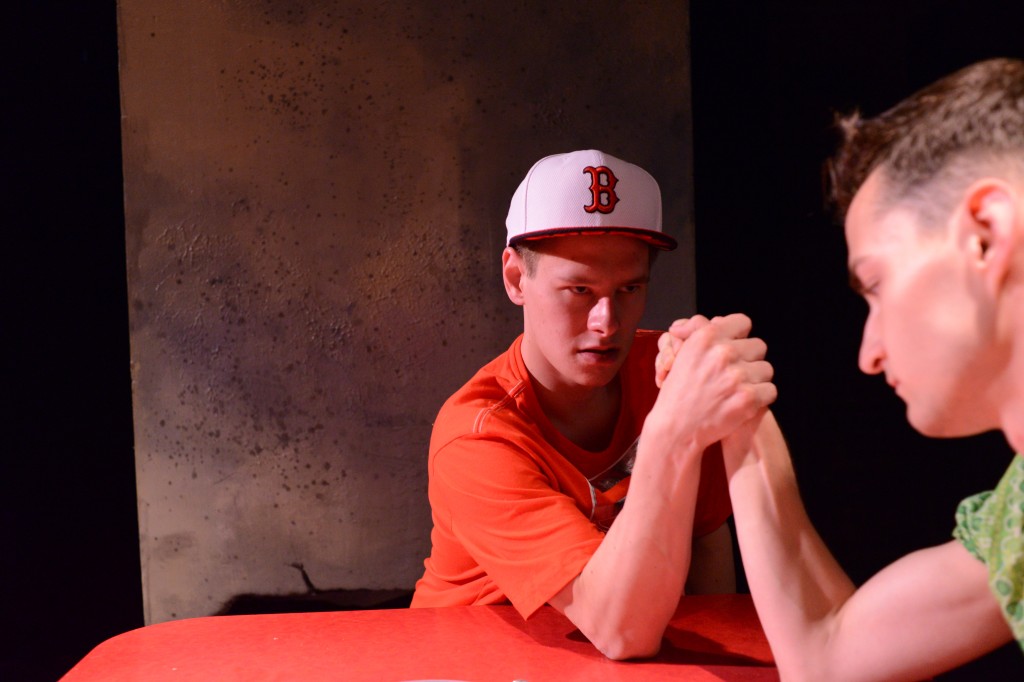 The look on actor Mark Cooper’s face says it all. 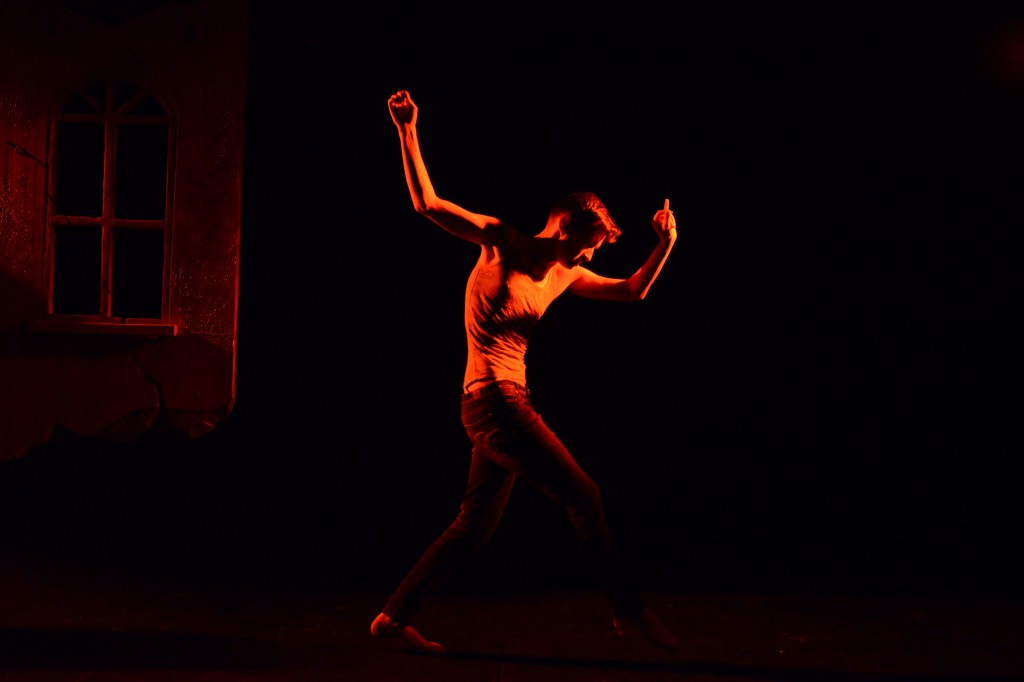 Another dance from late in the show is a pure celebration of the moodiness of Eric Baker’s lighting as it plays across Atkinson’s body. 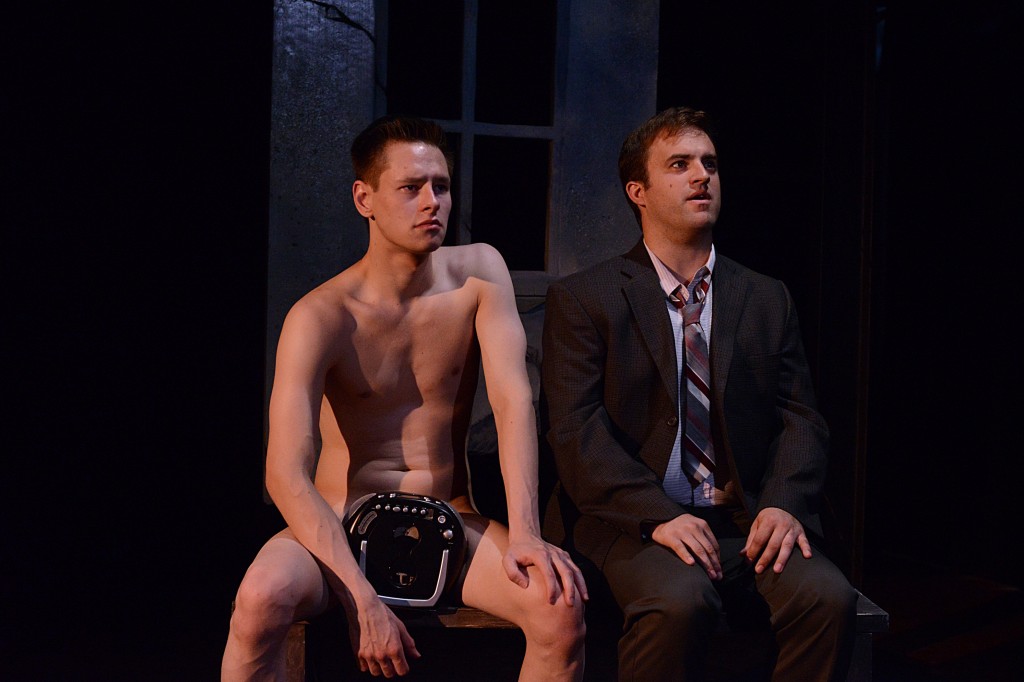 Mark Cooper and Mark Sherlock in You Know My Name, from a scene late in this very short play. I love the way the light plays across their faces. What are they watching? Well, I can’t tell you. 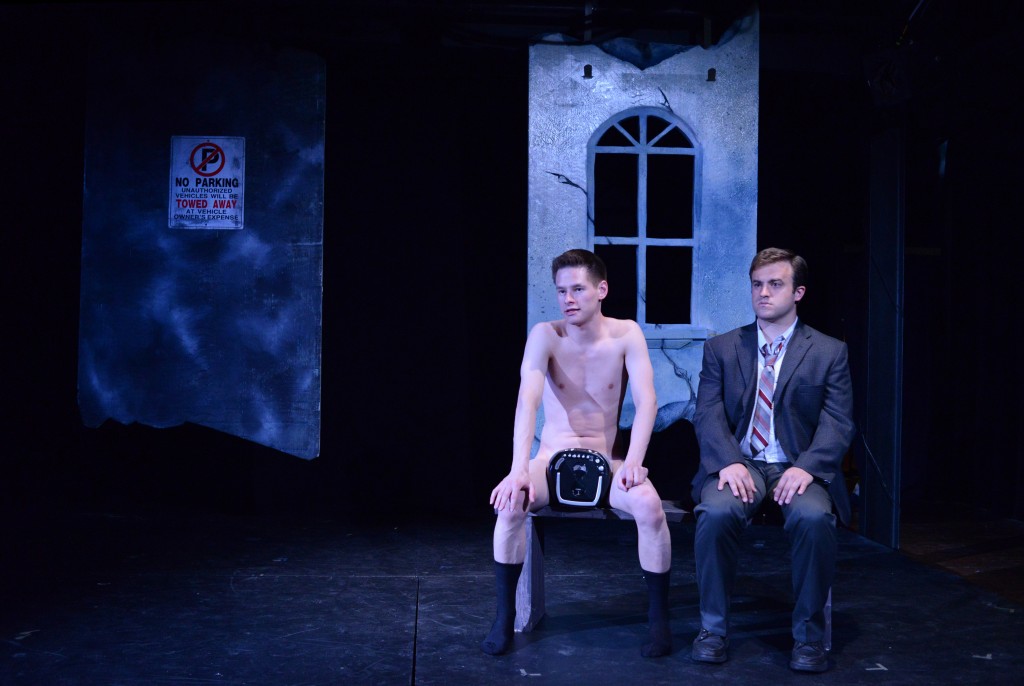 The very blue tint of this shot and the simplicity and weirdness of the two against the stark background captures for me the mood of this odd and moving little play.

I love the way the characters are focusing somewhere, but not on each other—and again, that hint of wall. 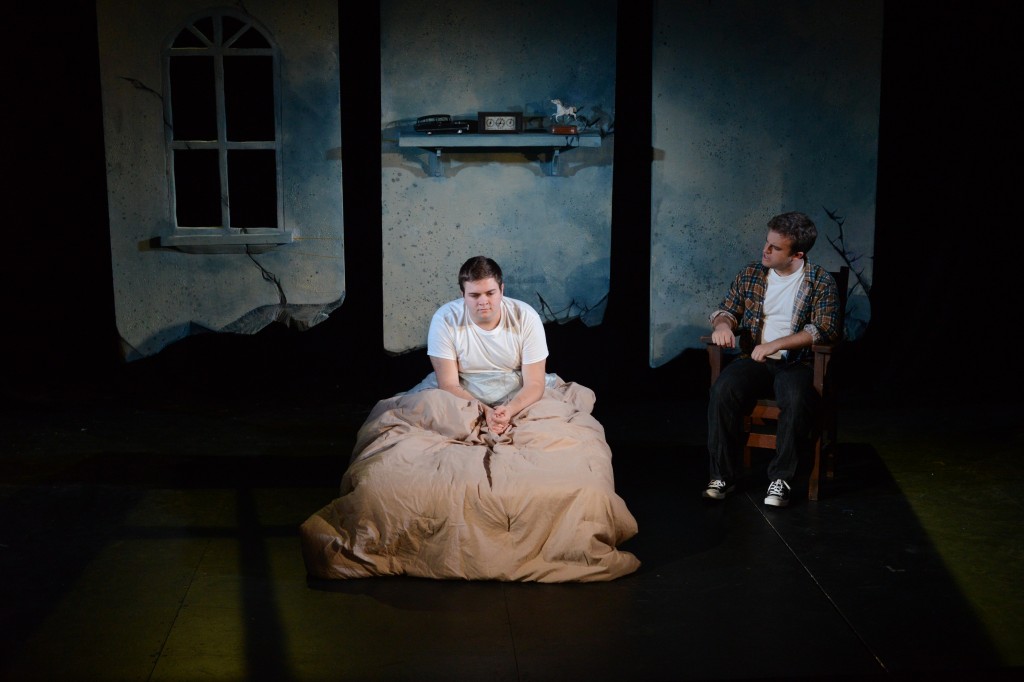 This long shot of Connor Feimster and Mark Sherlock to me has the essence of the final play, What Happened When. I particularly like the shadows cast by the walls onto the stage, which frame the action so nicely. 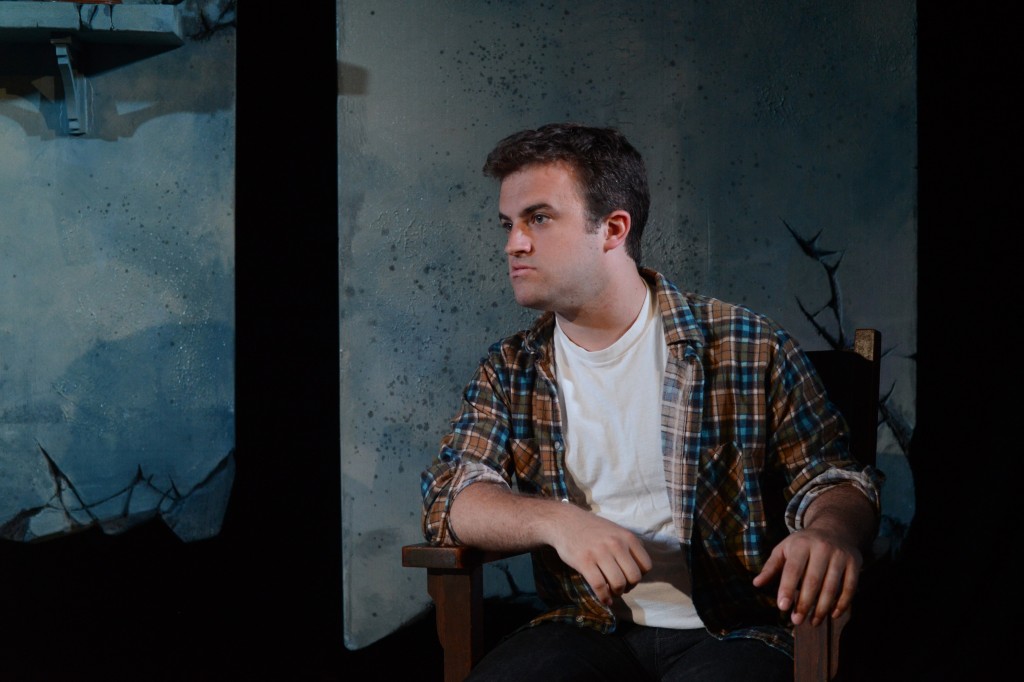 Mark Sherlock has such a photographable face, so full of emotion and interesting angles. The black space between walls and the creepy cracks in the walls add to the interest. 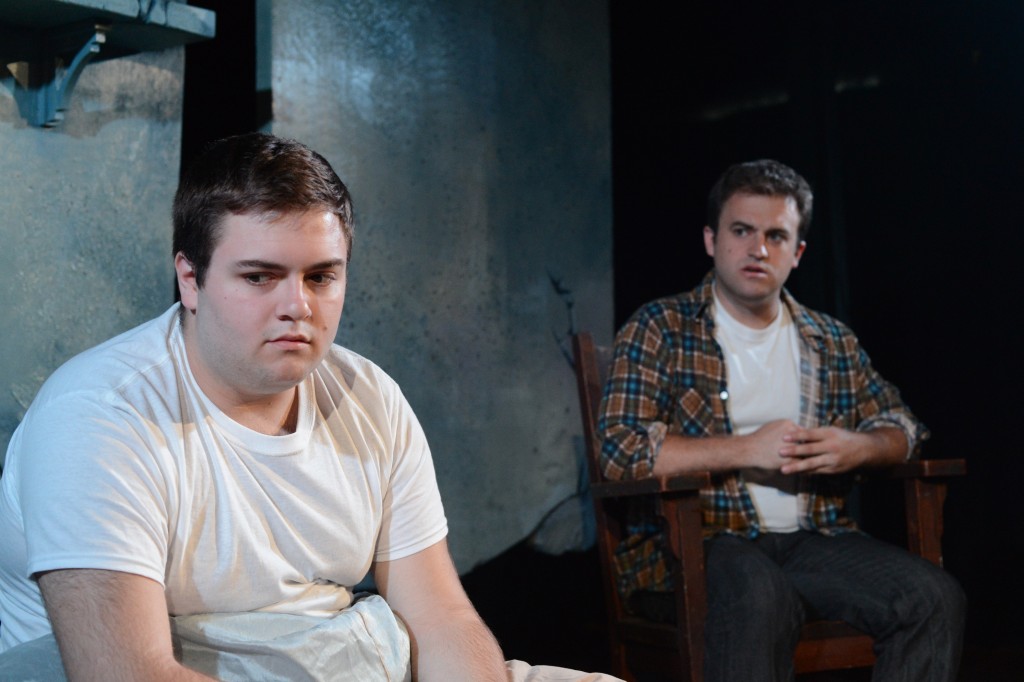 The focus here is on Connor Feimster, with Mark Sherlock appearing in a slightly out-of-focus way that emphasizes the otherworldly nature of this character who…no, I’m not going to say any more.

YOU KNOW MY NAME: A DANIEL TALBOTT TRIO plays as part of Quince Productions’ GayFest! [The SkyBox at the Adrienne, 2030 Sansom St.] Aug. 14-22, 2014. www.quinceproductions.com.

One Reply to “Photographing Quince Productions’ YOU KNOW MY NAME: A DANIEL TALBOTT TRIO”