Many years ago, on a plane, I was talking to the men in my row when they asked what I did. I said I was a dance writer.

“What the hell is that?” 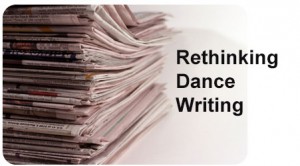 Sports writers cover every angle of sports from horse racing to curling. They write profiles on the jockeys, the horses, the owners, giving readers all sorts of interesting background on the subject. As dance journalists, we are reporters first and we do the same as sports writers. We just don’t have as wide and interactive a readership. Go ahead. Read the sports pages online and the lively commentaries below. Newspaper marketing people count those online hits.

My recent personal experience is apropos to the subject of the future of arts journalism. Just recently, I got back from two weeks in Germany. A five-city tour, with one, two-day detour to Prague. I was accompanying my husband who was giving a paper in Munich. My main objective was to try to get to Wuppertal to interview Dominique Mercy and his daughter Thusnelda for an article. Mercy and I had kept up our acquaintance since we met in Phoenix, when he performed with Pina Bausch’s Tanz Wuppertal in 1996 and again in 1999. I wanted to do a profile on the father/daughter dancing in the same company. With little connectivity to German Internet, we missed messages repeatedly. It didn’t happen. By the time we did connect, the Mercys, père et fille, were ready to leave for a performance in Toronto.

I also had an assignment from my Philadelphia Inquirer editor to interview choreographer, William Forsythe for a Pennsylvania Ballet preview focusing on the pieces he’s released to the ballet, including In The Middle…, which was onthe final season’s program. That would have given me the local angle and it would have come out on the opening day of the ballet’s 50th anniversary run. But it turned out Forsythe would not be in Dresden as planned and was refusing interviews anyway, even by phone. It, too, didn’t happen.

Here is some of what did happen on the trip. I visited the Palucca Hochschule fur Tanz one afternoon, which may give me an interesting story to pitch to a national dance magazine. Then on to the Hellerau, in the far opposite direction, in time to see Forsythe’s 2007 Angoloscuro. It was so shockingly, darkly different from the now 25 year old In The Middle, which I’d already seen on the Pennsylvania Ballet.

Another of my main goals did happen. My husband and I met with tanz magazine editor, Arnd Wesemann and his wife, choreographer Helena Waldmann, for five beer-smoke-food-talk-and-fun-filled hours, which resulted in a future story assignment.

These anecdotes illustrate the daily ups and downs of a freelance journalist’s life and work. You have to be ready to roll with what can happen, not what can’t. You have to keep going forward because, like everything else, dance journalism has gone global. Since the present state of arts journalism in the United States seems to be hanging on by its fingernails, I see the future of arts writing, criticism and reporting involving more awareness and interaction with the dance world abroad — in Europe, the UK, Canada, Australia, Japan.

Journalism is fine. Readers—which includes editors and publishers—are the problem: they don’t demand arts coverage the way sports fans demand sports coverage. Cultured readers and arts lovers don’t interact with newspapers like sports readers do. There’s no ongoing discourse for marketers to examine and count, like there is on the sports pages. Those bean counter reports go to the publishers and editors, translate to advertisers and therefore money and what subjects get the most ink. If dance fans and arts aficionados read at all, it is almost a totally passive act. Certainly there are blogs, ThinkingDance and dance sites like Steve Weisz’s philadelphiadance.org, where ongoing critical discourse on dance can be found. But this is almost always between dance professionals, not between dance audiences and dance writers/critics. Though Weisz argues that “68% of my readership is not from the dance community, but from the arts community and arts audiences.”

There are always going to be three to four different audiences and levels of arts readership and involvement.

In dance, the academic journals require 3,000- to 5,000-word essays or academically researched articles. If they pay at all, it’s about $150. Their readers are largely made up of other academics or artists. That’s kind of a disincentive for me to contribute.

There are bloggers who rely on personal preferences and may have no background in dance other than that they may have done it. I’ve heard from some dance bloggers who think that dance writing and criticism should consist of using the right technical terms for the steps instead of creating images for the reader. (Good luck with getting away with more than one or two technical terms and explaining them in your 400-word newspaper review.) Blog readers are largely friends and followers of the blogger. And these blogs often preach to the choir, without reaching a wide readership.

Furthermore, it’s interesting that the dancer/bloggers emphasize dialogue instead of criticism and journalism, further closing their circle.

Some very good writers have deep knowledge of dance, its histories, its players. Less than a handful of these have staff positions at newspapers in the United States. The rest must grub around for work. Many teach, wait tables, or, like me, rely on a spouse’s and other income in order to write about the subject dearest to us. I also write on food and travel, and review books.

The national dance magazines also pay poorly and edit and publish by committee, and so to me it’s hardly worth pitching a story unless I am extremely passionate to write it.

So, unless something changes from the decision makers in the newspaper and magazine publishing world, for example going back to the pay rates of the 1980s and ‘90s, making a living in dance writing and arts journalism cannot be a goal for anyone studying to be an arts journalist today. In the 90s, for instance, I was able to make a living (of sorts) by writing 60 or more articles a year for ten very different and demanding editors. You can’t even do that today.

But if you are lucky enough to write for a large metropolitan daily on a regular basis and lucky enough to have a keen editor, you may develop a following after awhile. I did. Locally, many newspaper writers have broken into radio reviewing as well, or writing for websites with a national readership like Broad Street Review. Again, though, with very low pay.

The dance field has to rethink arts journalism because of bloggers, limited space, the general indifference of publishers, audiences, and readers. Two things I saw in Germany (and in the past in other European countries) that are not manifested here in the U.S.: first is the deep role journalism plays on a local level. And second, an informed and enthusiastic audience base. That Forsythe concert took place way out in the boonies on a Thursday evening. Yet our tram was filled with concertgoers and made for a packed audience. But journalism still has a specific and important role to play nationally and internationally and, given the Internet, there might be a way to rejig the machinery to support the arts and its chroniclers.

As Weisz puts it, “International audiences definitely have a multi-generational view of the arts as part of their heritage and culture. As such, there is a much greater appreciation and interest in the arts.”

In sports, would people who don’t play golf or understand the strategies go to a tournament? There is tremendous internal knowledge about dance, but it is kept hidden. Why do people get so excited about seeing hip-hop dance, say, as in Rennie Harris’s work? Here, rather than familiarity breeding contempt, it breeds a comfort level – something audiences, especially, value.

Newspapers and new media outlets must commit to providing as much back story for the arts as readers and audiences need. Newspapers need to provide more assets to their print publications, such as links to video and more photos. New media needs to refine its content, using writers with institutional memory, knowledge of the field, and good research skills, who can contextualize and chronicle as well as critique. A disconnect remains between the old school newspaper critics and the new school online writers and bloggers that does breed contempt for each other; instead, though, we need to be reconnected. In short, we need to create a symbiosis between experts who can provide experience and meaningful content and Internet experts who can provide exciting frameworks and delivery systems for it.

Proving my point about readers being part of the problem, Weisz told me, “The delivery system is there but people are reading less amongst the younger generations, and the older ones still do not use the internet as their primary news source. Our picture stories get five times the viewing over a text based article.”

So what we now have is a shotgun wedding between traditional arts journalism and the many new models offered through new technologies. Can we make this marriage work? We better keep trying, if only for the sake of the children.

***This is an expanded version of the talk Merilyn Jackson gave on the Future of Arts Journalism panel at the Dance Critic’s Association conference held in Philadelphia, June, 2014.

One Reply to “Rethinking Dance Writing”