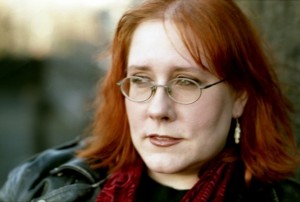 Daniel Talbott (You Know My Name: A Daniel Talbott Trio) and Kathleen Warnock (Some Are People), two of the playwrights with work in this year’s GayFest!, happen to be old friends and professional colleagues. These two unique personalities interview each other about their participation in Quince Productions’ festival, their writing habits, and a slew of other topics from desserts to dreams.

Kathleen Warnock: How did you get all the way to Philadelphia? Where did you start from?

Daniel Talbott: I was lucky enough that Rich Rubin <Quince’s producing artistic director> produced and directed my play Slipping in GayFest! a few summers back and that led to us becoming friends, and to him being kind enough to commission me to write a couple of other plays. The first time I went to Philly I completely fell in love with it and I couldn’t feel more fortunate to keep getting excuses to go back there and hang out with the wonderful Quince folks and to get to walk around that extraordinary, magic, old city. And how about you, what’s it feel like to join the exalted group of GayFest! writers (with the exception of me, of course)?

KW: Well, it’s PHILLY GayFest!, which makes me doubly happy: I’m a queer playwright and I was born in the City of Brotherly Love, my family goes back here for a few generations…and it’s the first time I’ve had a full production in my hometown (though I was lucky enough to have a couple of my stories read at InterAct’s Writers Aloud series). Also, between you, me, Bob Patrick & Steven Fales, all of us have worked with TOSOS, our wonderful NYC LGBT company that was founded by Doric Wilson. Doric would have been proud of us. I’m not sure we could have gotten him to Philly, though!

DT: Give me some history about Some Are People. Where has it been done before?

KW: It started as a piece called Off Season at a Wings Theater 24-hour play fest in NYC. I had three words I was required to use (sand, anathema and . . . something else), three actors whose names I picked out of a hat, and a director. That short piece felt like the end of a much longer one, and I plunged in and worked on it, and we presented it at EAT as a one-act, and then I got it in my head to take it to Ireland (I’d run into the Dublin Gay Theatre Festival on a trip to Ireland and really, really wanted to be part of it). It also won the Arts & Letters Prize and was done at GCSU in Milledgeville, GA, hometown of Flannery O’Connor. They brought me down there and I got to tour her house, and see my crazy play about queer people in Provincetown . . . in a small town in the middle of Georgia.

DT: Tell me about Dublin.

KW: I feel like I lived there a very long time ago . . . and it’s like coming home when I go back for the festival. I love seeing new work from all over the world at the festival, and have made many long-time friends and colleagues from simply walking up to someone and saying “I love what you did.” I recall seeing a show called Slipping produced by a Chicago company, and I had to find out who wrote it, and it was YOU! Start of a beautiful friendship . . . 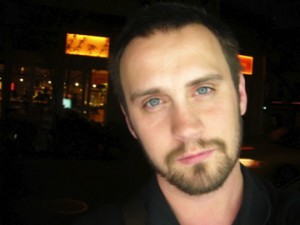 DT: What would I do without a Kathleen Warnock in my life?

KW: Well I’d be bereft without a Daniel Talbott!

DT: What’s especially cool about this production of Some Are People?

KW: First, that Rich Rubin wanted to do it; we brought down a reading of Outlook last year, and really got along well and found a lot to respect and admire about each other. So when he asked if Quince could produce Some Are People this year, I JUMPED at the chance. And: my hometown.

DT: Tell me about P-Town and why it’s such a powerful and magic place for you. How is it part of Some Are People or part of you?

KW: There’s something special about that little town at the end of land. Maybe it’s because you’re surrounded by ocean on three sides, maybe it’s the amazing light. Maybe because it’s so hard to get to. But I’ve always loved the beach (we went to Cape May Point in the summers when I was a little girl). P-town is a place where they take you as you are, and you are taken seriously as an artist if you bring your good work, and there are people there who can appreciate it.

Which rock star inspires you?

DT: I love Patti Smith and Lou Reed. I love David Bowie. I love Ani DiFranco. I really loved Kurt Cobain for a ton of reasons, and I have a soft spot for some of the wonkers like Courtney Love and Axl Rose. Love me some Mick Jagger.  What song gets you so hot, you feel like you can’t stand, and/or you have to fucking move cause it overwhelms your body and joints?

KW: I was just thinking about this . . . and the one that came to mind immediately is “Love Shack” by the B-52s.

DT: Do you dream?

WK: All the time. There are about four monologues in plays of mine that pretty much came straight out of a dream.

DT: Do you dance at home?

KW: No, but I regularly sing to our turtles, dragons, and guinea pig.

DT: Do you keep a diary?

KW: No, but I keep spreadsheets.

DT: Many of the same folks who helped me out and guided me as a kid and became family to me when I was starting out are still the folks I look to now, along with our other family members and friends who we’ve met along the way. I seriously don’t think we’d make it without them. I think of it almost like this wonderful old traveling players troupe that leans on each other and hopefully brings a ton of history, love, and scars to the work they do together. Who is your theatrical superhero and why?

KW: I call Doric Wilson & Tina Howe my fairy godfather and godmother. They helped shape my identity as a writer and as a person. They gave me the idea of community and how you take care of the people around you, and how being an artist is also giving of yourself to make the group as a whole stronger. And of course, you are my favorite shaman-poet.

DT: What are your writing rituals?

KW: Finding the TIME to write. Often writing to the same song played over and over, or the same artist. (“Cherry Dream,” the song we use in Some Are People, became so integral to the writing process and the play that I made an agreement with the musician, Karyn Kuhl, to use the song in the play . . . and of course I pay her royalties, because all artists should be paid for their work.) And you? When you set out to write a play, do you know how it’s going to end? Does it change while you’re writing it? Does it come to you in one big flash, or do you chip away at it until you understand it better?

DT: It’s really different every time. Sometimes it’s just a feeling or an image or a small bit of dialogue and I start to try to build the railroad tracks of the story from there. Sometimes I think I know how it’s going to end and then it becomes a different beast. I love that. I love surprise, and the work and actions of a play taking over. What do you do when you aren’t writing brilliant plays?

KW: Too damn much. I have a day job at Google where I work on the internets. And I run a reading series called Drunken! Careening! Writers! at the KGB Bar in NYC (every month since 2004). I work with TOSOS and EAT and the Dublin Gay Theatre Festival. I am married to a wonderful woman who is the light of my life, and we have several pets. How has being partnered and having a child affected your world view and consequently your art?

DT: That affects everything I do. Everything in my life has them in my heart and mind.

KW: Pick a dream cast and director for one of your plays, from every director/actor pool that exists. And tell us a little about why you want that combination.

DT: I don’t mean to sound annoying and precious, but I feel I get to work with my dream folks almost all the time with our friends and family. I write with them all in mind a ton and I couldn’t feel more lucky to work with them all.

KW: Is there anything I forgot to ask?

DT: I hope not cause I have to save this and turn my computer off and get back on Highway 1 and head up the coast to San Francisco.