Midway Avenue is a dance/theatre work that speaks to the sensation of memory as kinetic experience, one in which choreographer/performer Nichole Canuso repeatedly refers to as “map.” The piece leaves room for audience objectivity of experience while referencing concrete objects and moments in time. The setting is a chalked list of 24 items running down either side of the stage, with crossroads of domestic props that Canuso overturns, dances with, seizes as puppetry, and deconstructs on multiple visual/kinetic/verbal levels over the course of the show. Midway Avenue is part autobiography, part an invitation to the audience to ruminate on one’s own perception of childhood (which Canuso terms “portals”), and in some regards a moving statement on the power of architecture as both literal and internal space, collectively shaping the means by which one perceives and travels through the world.

The performance is largely identified as a dance piece; indeed, as a trained dancer, Canuso carousels, spins, and shyly lingers through the space. Movement reveals not only character, that of child, but also serves as commentary on memory itself. In one instance of abandon, Canuso dances through the space in a skidded choreography: the end result is smeared chalk and the unidentifiable language of what was once the set, furthering the palimpsest of audience foray into memory. “This is a map of a map inside of a map,” she states in a moment of poetic-like clarity: now it is the live performance space that must be recoded.

Midway Avenue is described as a work where “stories and images of growing up in 1980s Philadelphia are inventoried and systematized within a constantly shifting landscape.” But the piece is more child-centric than localized. In only one instance does Canuso refer directly to the Philadelphia area, in a speech about a young neighbor named “Jennifer” and the possibility of “going to Wawa for hoagies.” Rather, the landscape of Canuso’s childhood home is animated through verbal imagery and a shifting stage design in which details (from room corners to furniture) are spontaneously mapped out and pulled apart over the course of the performance. 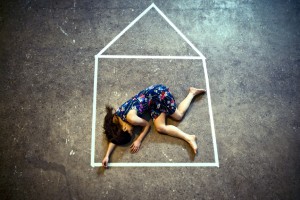 Canuso creates her fluid stage design through the use of masking tape. Through its use, Canuso metaphorically collides not only the function of memory but the semiotics of “tape” itself, highlighting their similar functions of stickiness and temporality. In an early example, Canuso creates a sound sculpture by placing a cassette recording of Chopin’s 24 Preludes over the figure of a piano etched onto the floor. The notes flood above the two dimensional instrument and animate the space, ghostlike. In another moment, a foot of tape serves to represent Canuso’s childhood hamster who had died, a memory which she enacts by taping a raised mark on the stage and subsequently “kills” in a punky sober-faced soubresaut that seems to last indefinitely, perhaps a statement on death itself (or at least, childlike indifference).

Canuso utilizes many of the domestic props as part of her movement score. Most notable is a cheese grater, which takes on an edgy life in a climactic shadow puppet finale.

Perhaps the cornerstone of the piece lies in its very middle piece: #17. Speech to a Dead Body. The moment is enforced as central to the piece not only spatially, but also structurally, occurring somewhere midway within Midway itself. Here Canuso shares a fictional memory-image: that of a bloodied corpse on her childhood living room couch. The meaning is later unpacked as a possible metaphor for the grief that can also lie within childhood: soon after the speech (which does not even actually take place, but is rather an invitation by Canuso for the audience to imagine their own devised memorium), Canuso reveals the painful moment of parental divorce, next physically taking the place of the imaginary couch and dead body.

Midway Avenue is an investigation into personal memory and the nature of memory through the subject of architecture. Within the abstracted playfulness of the work, including various modes of dance, red-nose clown, and puppetry, is a sophisticated exploration of childhood and familial love. It is a generous piece, engaging and enigmatic. [FringeArts, 140 N. Columbus Boulevard] May 2-4, 2014, nicholecanusodance.org.