You never expect lighthearted comedy when going to a show by BCKSEET Productions. Argentine prison dramas, biting Edward Albee plays, and a Christmas show depicting Santa Claus as a reindeer molester — these are standard fare for the small Philadelphia company. It’s no surprise then that BCKSEET’s first commissioned work, Losing the Shore by Catherine Rush (now onstage UPstairs at the Adrienne), is an ordeal of uncomfortable intensity.

The play follows politician Adalai Stevenson (Michael Byrne) on a voyage to Hawaii in the aftermath of his 1952 presidential election defeat to Dwight Eisenhower. Stevenson was an idealist and an intellectual, a Illinois governor reminiscent in Rush’s script of a defeated Al Gore and a youth-inspiring Barack Obama. The unsuccessful candidate is lost at sea, struggling to come to terms with his uncertain future, but he is the most grounded of all the characters on this ship. 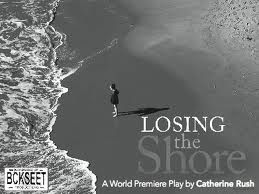 Journalist Alicia Patterson (Catherine Palfenier), the politician’s one-time mistress (according to the play — the real life Patterson was editor of Newsday, scion of a publishing family, and married to Harry F. Guggenheim), is stuck in a miserable marriage, feeling her age, and ravished by guilt over her anodyne coverage of the Rosenberg trial, which reaches its climax of injustice as the cruise progresses. Joining the couple for drinks are three young passengers: Ruth (Megan Slater), the pious daughter of the ship owner; her deeply unhappy friend Hortense (Kate Brennan); and the quick-witted Stuyvesant (Nathan Edmondson). Each is running from their parents and their problems, be it spiritual discontent, mournful guilt and regret, or a secretly debilitating illness.

This sounds like a lot to successfully cram into one boat ride, and Losing the Shore doesn’t quite manage it. After a humorous beginning, including a great scene featuring Brennan as a disconsolate Hortense, the play gets seriously intense quickly. BCKSEET’s fans will enjoy this emotional confrontation, but the plot becomes convoluted by one too many devastating revelations.

Despite some flaws, Losing the Shore retains our interest throughout with an impressive display of acting, especially by the female cast. Brennan and Slater gel superbly and seem well-suited to roles as ‘50s era women. Bryne is solid as Stevenson, though his character lacked some of the masculine gravitas one might expect from an almost-president. Each actor retains a consistency of character throughout the script’s varied demands.

BCKSEET spent much of its six-year stay in Philadelphia in the restrictive confines of the Red Room, the Society Hill Playhouse’s noisy second stage. They are clearly enjoying their new-found freedom. Losing the Shore is their most elegant staging ever, with a floating set design (Daniel Krause) and seat arrangement that makes the best use yet of the new UPstairs at the Adrienne space.

In between the action, director Andrew Borthwick-Leslie has sharply dressed stage-hands making smooth scene changes to composer John Glaubitz’s classy lounge music. And I’m sure each actor wishes they could take home the great ‘50s outfits designer Peggy Walsh has found for them.

If Losing the Shore is imperfect, this staging, and the ambition required to produce such an emotionally demanding original piece, are most worthy of praise. Philadelphia theater needs more BCKSEETs.

Losing the Shore by Catherine Rush (world premiere)
BCKSEET Productions at UPstairs at the Adrienne
March 16 – April 2, 2011
Tickets: $10 – $21
($1 of every full-priced admission benefits the Children’s Hospital of Pennsylvania)