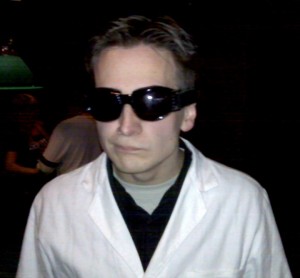 Mark Mackner has been making supernatural thrillers in the underground Philly scene for almost 20 years now. His short film STUMP GRINDER has just been released online. He chats with Phindie about his latest release, the Philly independent film scene and his future goals.

Phindie: So uh, STUMP GRINDER what’s that all about?

Mark: Well, it’s a 3-minute piece concerning a man with no arms or legs who is still very sexually active. It’s basically the trailer for a lost 1970s adult film that may never have existed. I created it for the Midnight Show.

Phindie: That sounds like something you’d write. What else do you have in the works?

Mark: Other than that, my biggest project right now is editing what will be my 3rd feature release, THE HALF-LIFE HORROR FROM HELL.  I wrote and directed the piece, which is an homage to the atomic age drive in monster movies of the 50s.  So it has lots of the tropes and hallmarks of that genre, but it is still very much a Mark Mackner movie.  By that, I mean it’s a hard “R”… lots of bad words and violence, and even some nudity.  It has the biggest budget of anything I’ve ever done so far.

Phindie: I hear to got to work with one of your childhood idols in this film?

Mark: Yes! WWF hall of famer Jimmy “Superfly” Snuka stars in it!  It was surreal to direct Snuka.  I watched him wrestle on TV and live at the Spectrum and had his action figures as a kid, and then one day I’m in the woods with him and he’s playing a character that I wrote for him.  Crazy.  Anyway, this film has it all: comedy, romance, action, horror, suspense, and just plain weirdness.  Coming soon!  Beyond that, I’m developing a web series called “The Adventures of Embalmo the clown and El Gaucho, the Legendary Luchador”.  It’s basically my sitcom.  It’s about a hard-on-his-luck guy who was supposed to be a funeral director, but that didn’t work out, so he went to clown college.  And his best friend is a Luchador who is always coming up with ways to get them out of their rut and on the path to happiness. Problem is, they have a habit of running into Russian assassins, mad scientists, super-villains, and other kooky characters. I have 2 episodes of that filmed, and are in post production. I have 2 more written that I’ll need to shoot at some point.

Phindie: You’re very prolific, what inspires you to keep writing and creating films?

I just have so many ideas.  I’m never at a loss.  And when one comes along that I REALLY like, I start writing.  Soon after, I’ll have a script.  And once there’s a script, there’s a compulsion to see it realized.  I start emailing and texting all my favorite actors and actresses and we get to work on it.  I just feel that, you only live once, so as long as you keep having ideas, you should keep putting out work.  Because what if that one idea you sit on and never develop is the one that makes you famous?  Also, I want to leave a body of work behind for people to remember me by.  I want people to know I was here.

Phindie: How do you feel about the Philly underground film scene? Is there one? Should there be one?

Mark: Oh, there is absolutely a scene!  And what I like about it is that it’s so close-knit and so supportive, so if you ever need someone for a project, there’s a good chance you know that someone already, or you know someone who does.  I might need help doing special effects, so I pass my film along to someone who excels in that area.  Stuff like that.  You always have access to a person who has that needed skill to get your film done.  Another good thing about the scene is that they’re pretty good about coming out to support you.  If you’re screening your film, you’ll see many of the same faces time and time again showing up to catch your latest work.

But that’s also one thing I don’t like.  Eventually, you want to play to a wider audience.  You don’t want to just keep playing to the same people over and over again.  Sometimes it feels like you’re in a bubble, but it’s not their fault that it’s hard to draw more outsiders in.  So, yeah.  There should definitely be a scene.  It’s by and large a good thing for local, no-budget filmmakers such as myself.

Phindie: What’s one thing that Philly needs to improve the independent film scene?

More affordable venues to screen our films.  I’ve been fortunate enough to have films screened at the Trocadero, the Sol Luna Tea and Hookah Lounge, International House, and more, but those are always events hosted by other people.  If I wanted to have my own event, like my own premiere for a new movie, it could get pretty expensive renting a space for it.  Other than that, I don’t know.  The people are great, I’ve made lots of friends and met many people who have encouraged me to keep doing what I’m doing.

Phindie: Who are your influences/inspirations?

Mark: John Waters, Ed Wood, Stan Lee, Ishiro Honda, Ray Harryhausen, Chuck Jones, Tex Avery, Lloyd Kaufman, Johnny Rotten, Rowdy Roddy Piper, Bill Finger, Gerry Conway, Roger Stern, Chris Claremont, Marc Hansen, Tarantino, Scorsese, Bed Edlund, WWF wrestling of the 80s/early 90s, Japanese giant monster movies of the 50s through the 70s, Silver Age comic books, and much, much more.  That’s just what came to mind immediately.  I love fantastical stuff that’s larger than life, and over the top.  I also love breaking the 4th wall and drawing the audience in like you’re telling them a joke.  I often include provocative content, sometimes offensive, but mostly in the spirit of anarchy and creating a world where anything goes and anything is possible.  I want the audience to have no idea what I’ll throw at them next.  I want to keep the movie watching experience as fun and exciting as possible, given my meager resources.   And I hope to inspire spirited discussion.

Phindie: What do you want to be when you grow up?

Mark: I am 36 and I am still obsessed with Spider-Man and dinosaurs, so “growing up” may be beyond my capabilities.  But, to give a real answer, I’d like to keep making the kinds of movies I’m making, but make money and be famous for doing it.  Writing, directing, and performing… that’s always been my passion and I never tire of it.  To do what you love and be successful doing it is definitely the dream.

That, or a super-villain.  Or a cryptozoologist.  Those would be my 2 follow-up answers.