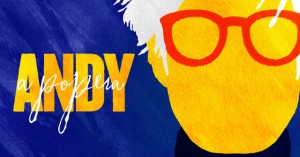 This article is reprinted with kind permission from Geekadelphia.com. See the original here.

Wednesday, July 16th, The Bearded Ladies and Opera Philadelphia will lay down stakes in the lobby of the Wilma Theatre, and, for two short weeks, perform an hour-long cabaret inspired by the outrageously influential life of Andy Warhol. Featuring original music by Heath Allen.

This opera-cabaret collaboration originally took shape back in May as 5-minute happenings occurring in the Philadelphia Art Museum and Eastern State Penitentiary; sprouting up in grocery stores and street corners across this city of Brotherly Love. The seeds of Andy: A Popera have been properly sown, now the project takes root at the Wilma in a few days, and it is set to bloom into a full pop art opera to premiere in 2015 as a part of Opera Philadelphia’s Opera in the City series.

Walking into West Philadelphia’s Studio 34, I meet the Bearded Ladies artistic director, John Jarboe in the hallway. He escorts me to the studio where his Beards have been working alongside the Opera Philadelphia folk for the last six weeks. Today is the last rehearsal in this space before the show hits the Wilma lobby.

As 8-year-old Andy Warhol began his art career drawing pictures of cows in exchange for Hershey bars in his mother Julia’s kitchen on Dawson Street, in a working class slum of Pittsburgh.

The cast of Andy: A Popera starts out small rehearsing mostly barefoot on a wooden floor. At the center is Sean Lally, as Dr. Peter P. Never with new pages of the script in his hand.

Jarboe asks him, “Do you want to try it on your feet, or run the music first?”

Lally, without a moment’s hesitation, says, “On my feet.”

Lally is such an honest performer it’s impossible to tell the difference between the raw material written just today and the older more rehearsed bits. Herein lies the brilliance of this production, and Warhol work; a seamless mixing of old material makes something entirely new.

Composer Heath Allen, sits down on a metal folding chair next to me and confesses, “Just as Liz Worth rewrote Andy Warhol’s ‘a: A novel’ in poetry one page at a time, we have incorporated found texts like the Philosophy of Andy Warhol sprinkled the show with old recognizable songs from the 1950’s and 60’s like Elvis’ All Shook Up, or Marilyn’s Diamond’s Are a Girl’s Best Friend, but its remolded to resemble something completely different, completely new.

Allen darts across the room quickly to take his seat behind his keyboard.

The metal fold-out chair next to me is not empty for long, the extraordinarily gifted, Bearded Lady; Liz Filios swoops down on it for a moment.

I ask her, Why Warhol? Why now? Is there something about the Warhol’s New York in the early 1960’s that resonates for you as a performer in 2014?

We, I say, we because this production has been written collaboratively, and on the fly. But we were attracted by the issue of commercialism in art. How does our work change if we get paid for it?

I started working with this group in 2010; it was an outlet of expression for me. I was performing/hosting on kids morning show on network televisionduring the day, which was great in its own way, but it was here with Bearded Ladies that I found the intoxicating risky environment ruled by Yes, and—

But I would say really Andy: A Popera is self-reflective. As Andy Warhol created something out of nothing, the Bearded Ladies began with nothing. We were individual artists each separately depending on established theaters, businesses, for work. We go to them to audition, and book jobs. But now with the Prince Theater closing its doors, and Philadelphia Theater Company in foreclosure its more evident now then ever that artists have to look to themselves, and each other to create work.

When we started working together as the Bearded Ladies, there was strength in numbers. Because you can say: Here we are we this concrete thing now-this group, Bearded Ladies.

We were making our own props out of cardboard. Now we just received this extremely generous grant from the Knight Foundation but we cannot lose the original energy we found with our cardboard, because the innovation of our cardboard days is behind everything you see here today.