Pennsylvania Ballet is finishing their 50th Anniversary Season with victory lap programming, but it has played out as more than just a milestone date, but a distinct turning point for the company‘s future. 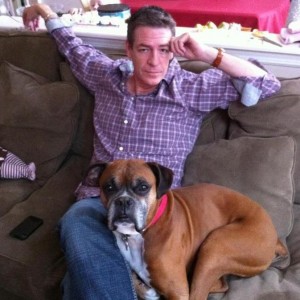 All season there have been rumors of internal strife, fueled by some dancers departing and last month, Roy Kaiser announcing that he was stepping after 19 years as artistic director, followed shortly after by a statement by executive director Michael Scolamiero that he too would be leaving. Industry watchers and fans speculated whether Kaiser was being forced out or independently made the decision to leave. Kaiser vaporized some of the rancorous rumors when he appeared in front of ardent Pennsylvania Ballet fans for the Conversations with the Pennsylvania Ballet series at City Institute Library on June 9.

Looking just a little bleary eyed from back to back performances schedule with PB performing A Midsummer’s Night Dream at the Kennedy Center and preparing for the season’s closer program opening in Philly, Kaiser was otherwise totally relaxed. Joe Paradin, host of the talks, introduced him, noting Kaiser’s achievements as Pennsylvania Ballet principal dancer, as artistic director and as a revered figure in the industry.

Kaiser responded “I’ll jump right in and talk about my leaving the company. I’ve been director of the company 19 seasons. I was appointed interim director in 1994. I’ve felt incredibly fortunate first of all to have worked with such great people and wonderful artists. I just feel like it is time, for me personally, there are things I want to do that I can’t do while running a ballet company and. I think it’s a good time for the company as well.” He paused in earnest. “To have new leadership…fresh blood. Ballet companies are living organism and you need new ideas. So I think it’s a win-win for everybody. This is a good thing,” he intoned, looking over to Melissa Montenegro, PB’s public relations manager and said rhetorically “So that addresses the elephant in the room.” Kaiser said his immediate plans were to rest “Then in September, I’m having my hip replaced and I’m very happy about that. And then, we will see. I’m going to do whatever, I want for a while.”

Kaiser joked about his age and 14 years as a dancer with PB, Kaiser danced many of the most celebrated and demanding danseur roles in the canon. He reminisced about coming to Philadelphia, from Seattle on a bus, with plans to stay just for the six-week summer training camp at Pennsylvania Ballet in the late 70s. He may have been a natural for the romantic ballet prince but asked by an audience member what his favorite role Kaiser singled out Jose Limon’s Moor’s Pavane, “and I didn’t do the Moor, I got to do Iago, I got to be evil. That’s the better role…..“ he assured. “I also got to dance Tybalt, So much more fun that Romeo. That is how I retired… I danced Tybalt, so …I died. They put me on a bier and carried me offstage, sometimes those things just work out,” Kaiser said drolly.

By the early 90s, Pennsylvania Ballet struggling to survive after two company shutdowns because of fiscal shortfalls and a succession of brief directorships. Kaiser took over in the mid-90s and started to rebuild the company. Kaiser praised his work with Michael Scolamiero (who is now executive director of Miami City Ballet) to “reshape the company in a way that we could accomplish a lot. There are a lot of companies that have folded since the 90s,” he said.

The company remained solvent going into the new millennium when other companies were operating at a loss. Over time, PB paid a price in other ways, by not building non- regional audiences enough because of years of very limited touring. There has also been criticism of the company being to aesthetically conservative and not doing enough to be competitive in the contemporary market. Even with these limitations, as Paladin noted in his introduction, Kaiser brought in 90 new ballets into the repertoire.

An expansive repertory was always a source of pride for Kaiser, “Any new ballets that I commissioned, even the bad ones, I’m glad as a company we took risks. I always felt a great sense of accomplishment any time we were able to bring something new to the stage. Because there were times, when that was difficult because of financial constraints would dictate that we shouldn’t take risks.” A calculated risk that paid off was Christopher Wheeldon’s Swan Lake to fit PB’s size and choreographically tailored to its individual talents.

“It was a million dollar risk,” Kaiser recalled, “I knew we would do well with it the first time around because it was Swan Lake and everybody would want to see it,” he explained. “But if it wasn’t good, then we would be eating a million and never be able to do it again. Fortunately, it was successful. Then to take it to Edinburgh (International Festival) and to be walking to the theater for rehearsal in the afternoon and see people queued up around the block because it was selling out. And to have the critical response we got.”

The end of his tenure as director is also notable for the re-establishment of the Pennsylvania Ballet school and he commented that “in just two years, to see the success we’ve had. Students from the school performed on tour in May at the Kennedy Center in the company’s production of A Midsummer Night‘s Dream. We had 27 kids from the school that blew everybody socks off. In five years, they are going to be our first class and look out. I love seeing dancers mature through the company.”

Of the current caliber of classical dancers, he said “Every dancer in my company is incredibly talented. Ten times more than when I danced. Dancer technique keeps evolving into something more. Dancers have a very different sensibility than we had …30 years ago. I pride myself on identifying dancers who have personality, bring something else to the stage, and are not just machines. When I see a specific talent, I try to map out a course. Once they assemble a body of work and this the key, if they take advantage of that.”

He also spoke of his uniquely strong collaboration with ballet orchestra conductor Beatrice Jona Affron “Beatrice has been with me the whole time. I’m so proud that we still have our orchestra, when money gets tight, they are often the first to thing that faces cuts.” The final comments came focused on the transition of the directorship. Kaiser will remain as the search for the new artistic director continues, depending, he said, “On how long it takes,” he said. As of now, I am free to stay through October with the hopes that a new director will be identified prior to that and I will be able to assist in any way that I can during the transition. If that time line doesn’t work out we’ll see what happens.”

He will not be participating in the selection process, he said, “I’m shouldn’t be involved in that. I’m sure that they will have many good candidates to look at. There are a lot of good people out there and I probably know all of them. The ballet world is small.” Adding, with a wistful tone, “ I hope that whoever he or she is they will maintain some connection to the Balanchine repertoire and legacy. And I hope that they will also acknowledge the history of the company in some way. There were wonderful ballets that I danced in the 80s, at the time considered masterpieces, but they are not masterpieces anymore . Audiences change, tastes change, dancers change,“

A few days after the talk, it was business as usual with Kaiser on stage at the Merriam Theater for a tech run-through and interacting with the dancers, as he has thousands of times before, for the dress rehearsal of season finale performances of his final program as director of Pennsylvania Ballet Jerome Robbins’s In the Night, William Forsythe’s In the Middle, Somewhat Elevated and two by resident choreographer Matt Neenan’s Penumbra and the premiere of La Chasse. And so it dancingly goes.