Campy fun abounds at SINema After Hours. While you wait for the show to start a zombie card girl walks around offering SINema merchandise for sale. The stage is decorated with skulls and crystal balls and cobwebs. The crowd is small, but joyously rowdy and seems ready for a good time.

The show starts with a short skit, a la Elvira/Up All Night. The show’s undead hosts “Stabigail and Cadavera” (Alyson Rodriguez Orenstein and Amanda Sylvester) intro their guest host “Silas Killington” (Mark Mackner). The dialogue is campy, silly, but most importantly, brief. The scenes never drag out too long so you never get a chance to process how ridiculous they are.

The evening showcases 5 short films, That Voodoo that you Do, Jewel, Cinderella 1, The Holy Sound and Blobageddon.

The opening skit sets up of the theme of the evening: body image. A struggling undead actress, Stabigail is trying to lose weight. As someone who only eats brains this is posing a problem. After the opening scene the actors sit to the side of the stage while the first film, That Voodoo that You Do, plays on a screen in the middle of the stage. The actors quip one-liners throughout the night (in the style of Mystery Science Theater 3000) and make it clear that the audience is encouraged to do the same.

That Voodoo that You Do, (Boy Robot Productions, directed by Andre Bennet, writers Tyler Spencer and J. Lynne Clegg) is an adorable short, black and white, silent film. It tells the hapless tale of Harlem Hank (Tyler Spencer) and his best friend Flatbush Frank (Christopher Tait). Harlem Hank is dead and Flatbush Frank is heartbroken, he solicits the help of Madame Zora (played to ridiculous perfection by Mark Mackner) to bring his friend back to life and old-timey slapstick comedy ensues. There are some nice comedic cameos by Alyson Rodriguez Orenstein and Noel Ostapkovich as the Volumptuos Mourner and Her Husband. This film is a great example of what you can do with a low-budget, high enthusiasm group. At only 6 minutes long and with great music (a selection of Scott Joplin classics as performed by Christopher Tait) the film had the audience laughing and engaged.

The second film is Jewel (from Rob Correa). This film starts out interesting enough, a woman (Jewel) comes home and as she takes off her make-up she becomes distressed about her appearance. The more she takes off (wig, dress, fake teeth) the more we see she has been hiding inside her make up – Jewel is not happy with who she is. The transition is very powerful. However, as the film progresses it gets very abstract – to the point of distraction. By the end it feels like it’s just being weird for weird’s sake and the ending is very unsatisfying and non-sequitor. This film is also only 6 minutes long, but it felt much longer.

The next film was Cin 1. Part of a collection of game inspired video art excerpts created by Daniel Meirom and Jennifer Shahade, Cin 1 is a “poker fairytale” – a darkly comic interpretation of Cinderella and a playful take on the desire for cosmetic perfection. This was a great contrast to “Jewel.” Cin 1 is definitely abstract, but in a very effective way. The style reminded me of the Czech New Wave films of the 60s. Bright and colorful, Cinderella (Kacie Marie) battles Evil Stepsister (Jen Shahade) in a poker game, with the prize being plastic surgery. The editing and cinematography were excellent, as was the acting. The live crowd watching was mostly silent as we were all absorbed into this film’s hypnotizing and effectively weird storytelling.

After this film was a short, cute sketch by the SINema crew. Cadavera tries to make some money by reading fortunes for people who have written in letters. However, the letters are all from 15 years ago. They have some fun with that (bad advice to Monica Lewinsky and OJ Simpson.) This transitions into the feature film of the evening: The Holy Sound. 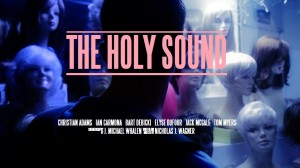 Written and directed by Nicholas Wagner, The Holy Sound is a mess of a film. It follows Rory (Ian Carmona) a supposed “rebel” of a high school student who is rude to his teachers, friends and pretty much everyone around him. I think the director was trying to make him seem like a modern Holden Caulfield, but he just comes across as a boring, egotistical jerk. He is attracted to the actual town rebel, Parker (played by the talented and beautiful Elyse Dufour) he waits outside her window and convinces her to go with him to a mysterious cave. Inside the cave is a glowing rock that…gets you high? It is unclear exactly what the rock does, but they both seem to like it, although the movie never really shows us any effects.

The film is plagued with sound issues, mumbled dialogue and the director has the actors either facing away from the camera or backlit for most of the film so we’re never really sure what is happening. The dialogue you can understand is hackneyed pseudo-philosophical ranting.

This film really showcases the genius of SINema After Hours. The cheap nature of the set and the cheesy skits belie some of the really intelligent decisions made by the troupe. The best decision of the night was to put the intermission in the middle of The Holy Sound. There’s no way the audience could have suffered through all 50 minutes of the film without a break for more beer.

The last film is a ridiculous little gem: Blobageddon from For Zombies Productions. The plot is beautiful: four zombies meet up with an alien to bring about the end of the world, which they do. Full of cheap “special effects,” amusing subtitles for the zombies and an over the top ending, it’s easy to see why this film won the 2012 Phoenixville Blobfest short film award.

Overall SINema After Hours was a really fun event. Watching cheesy films in a small theater with other like-minded viewers who are encouraged to shout witty remarks at the films is not something you get to do very often in this world, and I think that type of activity should be encouraged.

Shows are every month at Walking Fish Theatre. More info can be found here:
touchmephilly.wordpress.com/sinema.