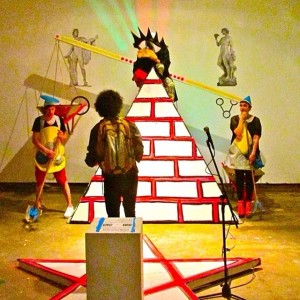 “This year,” co-curator Marshall James Kavanaugh told me, “it’s not going to be that big.”

Perhaps not as big, but equally as memorable.

At the front door of the opening night party on Friday, a smiling woman sold me a brick.

To each brick was taped a raffle ticket.

Armed with my $5 brick, I entered the gallery space, which is dominated this year by one major installation: ten-foot-tall pyramid erected out of lumber with a cartoony red-and-white facade. A massive scale straddles it, perfectly balanced, with a wheelbarrow on either end.

Atop the pyramid perched Marshall’s co-curator Augustus Depenbrock, dressed as a massive eye. One by one, people came forward and voted for order chaos, placing their brick in the correct barrow. 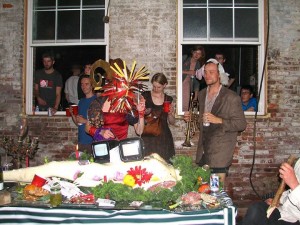 the left of the pyramid was a little shanty you could enter and perform a primal scream. A glass window on either side faced in on a small chamber with an apple and, if you hit the right decibel with your scream, the apple would explode. The mechanism for blowing up the apple failed pretty quickly (it worked a few times before the forces of chaos seeped into the mechanism), but that didn’t stop the crowd going in and screaming periodically while the Eye played master of ceremonies from his pyramid throne.

A few events were planned throughout the night, including an insane surrealist dinner with inedible foods and maniacal laughter around a naked mannequin. A unicorn played the trumpet and shouted for chaos while a Mad Hatter-inspired character tossed playing cards and bits of “food” in a frying pan.

“Dessert,” which was “served” later in the evening featured a wood chipper into which Marshall and his crew, laughing manically, began feeding all thirty volumes of the Encyclopedia Britannica.

Paper snow choked Little Berlin. The audience—I should say party-goers now, as the event climbed to ever-rising states of hilarity—ran around chucking fistfuls of knowledge shreds each other. “Chaos!” cried some. Glue was smeared on the wall, and paper was thrown at it. “Order!” cried others.

The wood chipper stopped working somewhere around the letter S. The forces of chaos, once again, slipped into the machinery.

In the end it was a surprisingly close vote, but Chaos won after a minor scuffle at the voting booths.

Three raffle winners were drawn from the chaos wheelbarrow, and they were led to the center of the room where a live tree—“Oscar”—stood. The three winners were given clippers and saws, and with a sickening kind of glee they annihilated Oscar.

Later, I asked Katie, a raffle winner who had helped with the sawing of the tree, how she felt about chaos:

“They gave me a saw,” she responded, “and said I had to take down this tree. And I think the most disturbing thing to me was just how into it I got, and decided, well this tree’s got to go. Well. And. I used to run a community garden, and I used to teach embassy, trying to get people to plant more trees.”

“I didn’t want to vote,” said Marshall later. “I wanted to see what the crowd wanted.”

I asked him if he was going to miss Oscar. 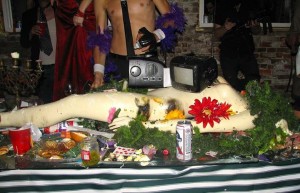 “Yeah. More so, I’m going to miss the fairgrounds,” said Marshall, meaning the outdoor sculptural garden which is one of Little Berlin’s three performance spaces. “The fairgrounds are being sold to a developer, and are no longer going to be owned by our landlord, which we’ve been leasing them from for a dollar a year.” Ironically, the fairgrounds are where Oscar would have been planted had order won the vote.

“This is the hierarchy of our civilization right now, chaos or order, nature or democracy. Or government, or capitalism,” Marshall added.