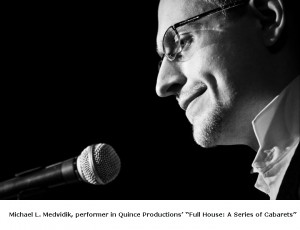 Relax, kick back, and take a load off. You work hard, you deserve a break—and a cabaret!

Downtown theater company Quince Productions—the punchy, LGBTQ-leaning bunch that puts on GayFest! every August—opens their sixth annual Full House cabaret series this Thursday in its ancestral home, the Red Room at the Society Hill Playhouse, and it’s looking as wicked, delightful and boozy as ever. (Boozy, because your ticket includes the price of a drink.)

7 cabarets, featuring 20 performers, hit the Red Room stage in just four days. Quince regular Alexander Kacala, also known as Tammy Faymous, opens the series on Thursday night with I Am Faymeproblems, a drag cabaret act he’s been perfecting since 2012. Kacala’s proceeds will be donated to the William Way Foundation.

Cabaret traditionally is the one-person-and-a-piano format, and there are plenty of pieces like that. Tyler Houchins’ My Romance is an evening of love songs looking at different types of love: romantic love, love of a place, or love of a type of music. Elizabeth Holmes’ Dude Looks Like a Lady #noliterally #agenderbendingcabaret is all about swapping the gender role in well-loved songs for the sake of fun. Nancie Sanderson and Meghan Strange’s Pretty Women is just about two pretty women with great voices singing songs.

But part of Full House’s success from the start, says Rubin, has been its willingness to bend the idea of cabaret in new, exciting directions. Samantha Morrone’s b*+che$ B Cr@zy: an artfully self-indulgent but still charming cabaret bends the form. Following several different women who are all different kinds of crazy (“hopeful, crazy, dog-obsessed, and insecure, just to name a few,” she says), Morrone takes a light-hearted look at gender roles. Shanna Massad’s I’m a Princess, Dammit!, backed up by Quince regular Mick Loro’s music and sound, draws audiences through a variety of musical styles as Massad expounds on the feelings of reaching a certain birthday and still feeling like a princess. 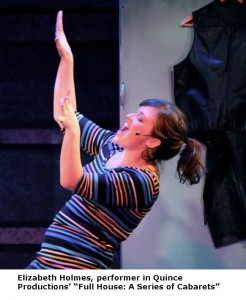 The song-and-dance crammed weekend ends Sunday night with Michael L. Medvidik’s Happy: A Gay Cabaret, all about the moments in our lives which make us happy, whether imagined or true.

“Full House was started in 2009,” says Rubin, making it only a year younger than the company. “We weren’t really in a position to do musicals, but many of the actors we were using had extensive musical resumes. So I thought, how can we make use of these other talents?”

Quince is known best for these two summer series, but they have a full season which stretches through the winter. It is the sheer number of shows Rubin manages to produce or host each year, from cabaret to main stage to touring, out-of-town productions, on a shoestring budget, which is one of the things that makes this company stand out.

I particularly like them, too, because Rubin doesn’t bother to hide the company’s limited resources. Their economical and functional sets offset by boisterous performers, and their ability to produce explore smaller format performances such as cabaret—and do them well—add to the charm of a small company making it in the big city. [The Society Hill Playhouse, 507 S. 8th St.] June 12-15, 2014. quinceproductions.com.

One Reply to “Full House (Quince): You deserve a cabaret!”