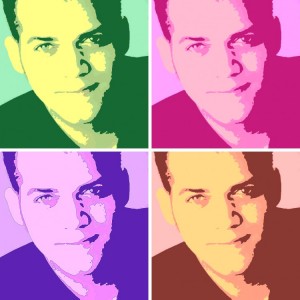 New Jersey native Erik Ransom developed a huge following in Philadelphia with his original work COMING: A ROCK MUSICAL OF BIBLICAL PROPORTIONS, for which he wrote the book, music, and lyrics, and also starred as glam-rock protagonist Damian Salt. He appeared in the title role of BRAT Productions’ drag version of CARRIE, and, as one of BRAT’s resident artists of 2011-12, created SAGA: THE ROCK OPERA; he was also featured in fellow BRAT Jess Conda’s self-devised shows ROCK AND AWE and ETERNAL GLAMNATION (Phindie review here), and has hosted annual sold-out shows on 9/11 at Underground Arts’ Late Nite Cabaret, including his own epic-in-progress TRAGIC EVENTS (Phindie review here). With a larger-than-life persona and a powerhouse voice, Ransom dominates any stage he’s on—with or without his glittering platform shoes.

The multi-talented actor/playwright/composer and “Libertine Idol” is currently taking New York by storm with multiple projects and rave reviews. Concurrent with his extended run in Anthony J. Wilkinson’s MY BIG GAY ITALIAN WEDDING and MY BIG GAY ITALIAN FUNERAL (Phindie reviews here) and a role in Sonia Blangiardo’s Emmy-nominated daytime drama TAINTED DREAMS, Ransom is preparing COMING for this year’s FringeNYC, after premiering his new creation GRINDR THE OPERA in May, and writing the lyrics for THE ANTHEM, a new musical based on Ayn Rand’s dystopian novella of 1938, now running through July 6 at the Lynn Redgrave Theater at Culture Project, 45 Bleecker Street.

Ransom made time in his busy schedule this week to talk to Phindie about his background, his latest projects, and his plans for the future.

PHINDIE: Your work is a unique combination of rock, opera, performance, and drag. What is your educational background, and who or what were your most important influences and inspirations?

ERIK RANSOM: I went to theater camp when I was a kid; I was the youngest of eight siblings—by far the youngest—so I was always around adults and was never really comfortable with other kids. The first time I really made friends with others my age was through theater. I was pretty shy, but when I had the opportunity to assume different characters and accents, I felt more comfortable and it was great. I did theater through high school. When I started singing, I had more of an operatic tone, so I studied opera in college and was selected for a program to receive free voice lessons with bass Jerome Hines, and I also studied in Philadelphia with tenor Enrico Di Giuseppe. From there I went on to do mostly musical theater; I did performance before writing, and learned to play guitar quickly. Through that I realized I could write music. I already had lyrics in my mind, so I decided I wanted to be a rock star. I was especially influenced by David Bowie after seeing him in the movie Labyrinth, and also by Amanda Palmer of the Dresden Dolls—I loved alternative pop music with clever lyrics.

ER: Pre-school! My mother (who is an elementary school teacher) always tells the story of “Where’s Erik?” We had a Christmas pageant and I was too young to do a full scene (I was about three at the time), so I was just put in the ensemble with the youngest kids. When the boy in the Santa suit freaked out and couldn’t go on, they asked for a volunteer to take his place; I immediately said “ME!” and went missing from the ensemble. It was my All About Eve moment—and I promise I didn’t poison him!

PHINDIE: How did you first connect with the theater communities in Philly and New York?

ER: In Philadelphia I did an apprenticeship at the Walnut Street Theatre shortly after college, along with Conrad Ricamora (who is doing very well; he’s the male lead in David Byrne’s musical HERE LIES LOVE); before my apprenticeship, I booked my first Equity contract at the Fulton in The Secret Garden. My hallmark at Walnut Street was doing accents and extremely funny characters. Conrad was always the lead, and I played everybody else, so he would have all the kids lined up after the show to get his autograph, and I would be the cult figure with a few odd outsider kids. I was recommended by Walnut Street to Madi [DiStefano, founder and former artistic director of BRAT] for Naked Cocktail, a three-person show in which I had five or six different voices to do. That production was more in tune with my sense of humor than a kids’ show.

In New York, it was through auditioning. I don’t like the big cattle calls, and am more interested in doing new work, so I went for the smaller shows; I played Christopher Columbus and Saddam Hussein’s assistant in musicals! Some of the shows were horrible, and some were bad experiences for multiple reasons, but in 2007, I did Anthony Wilkinson’s Boys Just Want to Have Fun, and he has been terrific to me ever since. After that, I stopped doing theater for a while; I was doing more glam-rock, around the time when Lady Gaga and YouTube were becoming popular. I realized that people wanted a show, more than just a tee-shirt and jeans, and more than just a short teaser online. So that was when COMING came out, when I was getting more theatrical, creating an on-stage persona (because I’m still pretty shy). I was drawn to the concept of Sodom and Gomorrah since I was a kid, and I thought, what if some survivors from there had me as a descendant and New York was the New Sodom? So I wrote the song “New Sodom” to introduce my persona on an album, but then it became more than an album, like “Ziggy Stardust.”

PHINDIE: What are the main differences between New York and Philadelphia in terms of getting cast and getting shows produced in each? What are the similarities?

ER: Oh God, the differences are huge! New York, as the English-speaking theater capital of the world, is a market that can produce sustainable theater that can run long-term; major investors are there, and theater is big business. I always say that New York is my wife and Philadelphia is my mistress, because New York has a bigger dowry! Philadelphia is not as much marketability- or money-based; audiences are more welcoming and less critical. As far as the difference between auditions, there are so many shows and calls in New York that there is a high level of preparation among a subculture of professional auditioners—actors with wealth and connections who do more auditions in a week than a friend in Philadelphia told me she does in two months. I’m seeing more similarities between the small companies in Philadelphia and the scrappier companies in Brooklyn, working on a shoestring budget with more alternative shows and casts. But the main similarity between New York and Philadelphia is that neither market bats an eye at edginess—both are very intelligent and literate, and both are open to new work. 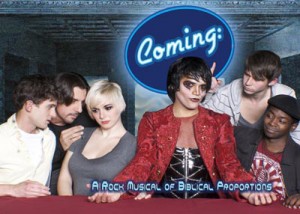 PHINDIE: Tell us about your creative process in developing new works like COMING and GRINDR.

ER: It’s been very different for every show, but in general it starts with an idea, then snowballs into an obsession! I had the first draft of COMING done in five days, it was all-consuming. I was playing guitar a lot, so I wrote the songs quickly on guitar; it wasn’t really composing. For GRINDR, and SAGA, I scored more; I didn’t just do chord sheets, but composed for piano, so that took more time. Also for COMING I didn’t have a plan or an outline, and hadn’t done anything like it before, whereas with GRINDR I had a good idea of when I wanted it to end. I actually started GRINDR around the same time as COMING, but it sat on the shelf till this past year.

PHINDIE:Do you approach your own self-devised works differently than a show like THE ANTHEM, for which you created the lyrics for director Rachel Klein, with a book by Gary Morgenstein and a score by Jonnie Rockwell?

ER: Yes, that was the first time I was only in charge of the lyrics, which is my strong suit. I had a three-week deadline and was done in a week. I’m used to doing everything, but there was something freeing in doing just the lyrics; I was told the theme, the plot, and the hook ideas, so I had enough to work with, which made it easy to structure. I just had to make it rhyme and make it witty; I had the least pressure of anyone, as the most recent addition to the team. There were rewrites, but all were done in conversation with the director.

PHINDIE: What’s the concept for the show, and why do you think you were selected for the team?

ER: The show is very loosely based on Rand, but it’s more of a sci-fi discotopia than a dystopia; as the promo says, there’s “music, dance, and capitalism.” It’s a fun spectacle, filled with exaggeration, and it’s hilarious. There’s threefold exaggeration in the world of THE ANTHEM, as an ideological allegory, as science-fiction, and as a musical. Any one of those genres is already exaggerated, and with all three it can’t be anything but the height of camp! The humor lies therein.

PHINDIE: How are your plans progressing for future incarnations of COMING and GRINDR?

ER: I’m in the midst of working on COMING for FringeNYC and just held auditions this past Tuesday; callbacks and offers are coming soon! I’m excited to be back with the show that holds a special place in my heart; it’s like my child, and to this day it’s my favorite role. I’m also currently working toward a larger production of GRINDR for fall or winter, after the Fringe; all I can say at this point is that there is interest in it. I’m excited about the amazing team that has been binding together in New York after GRINDR and THE ANTHEM; I’ve been very fortunate and honored to work with director Rachel Klein and music director/arranger Charles Czarnecki, and I hope to continue in the future!

PHINDIE: Can Philadelphia audiences look forward to seeing you back on stage here soon?

ER: I hope to do GRINDR at a larger venue in the near future. And I’m talking with Jess Conda about developing another new rock musical that will feature her. It’s been a really exciting year!

One Reply to “Erik Ransom Takes New York by Storm!”