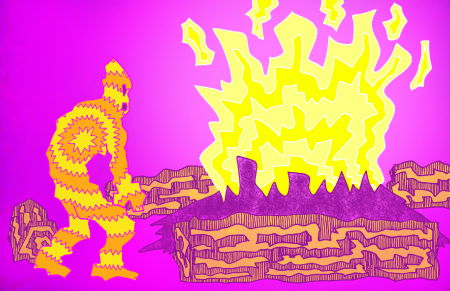 In episode one, we talk about performance comic books in West Philly, insomnia comedy (insomedy) in Point Breeze, and a web-based internet-dating collage. 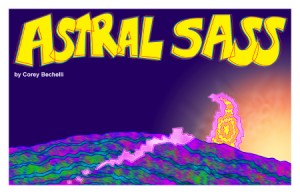 Corey Bechelli is an animator, illustrator and comic book artist with a wild website. His work, influenced by psychedelic colors, gestural patterns, and philosophic rumination, includes the Astral Sass comic series and his performance illustrations with Blown Away. He talks about how he’s bringing comics to the SoLow Fest in a unique way:

CB: The Astral Sass performance for the Solow Festival will be me reading from Astral Sass 03, which is not online anywhere at the moment. It is the latest chapter in a nonlinear story.

JF: How is your electronic character’s anarchic journey echoed in your own life?

CB: The paths that the characters in Astral Sass traverse are the same paths that all living things traverse. How do we continue to live in changing environments, changing mindscapes, continually changing lives? We must be willing to adapt, let go of old patterns, and move forward in order to continue living.

JF: Was there a specific series of events or moments which inspired you to create this show?

CB: Years ago I saw artist Eric Drooker project panels from his comics onto a screen, and he recited poetry/played harmonica to them. It blew my mind, as a person that draws comics, to see someone else perform for an audience something that is usually created and experienced in solitude.

JF: What kind of protective gear should audiences wear to your show?

CB: We all carry shields, but if we can remember to put them down for a moment, we could learn something. 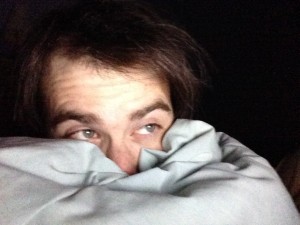 Comedian David Lawson has performed pieces all around Philly in the last couple of years, including VCR Love (an unabashed exploration of all things porny) in SoLow 2012. You can see videos of him on YouTube, that’s how famous he is. We talk about his second helping of SoLow:

JF: Describe your show in ten words or fewer.

David Lawson: Recreation of a space-obsessed, sleepless night from midnight to 6AM.

JF: We expect dirty stuff after VCR Love. What controversial topics are going to come up in Insomnia in Space?

DL: The most controversial thing in Insomnia in Space is my assertion that I never want to sleep again. It’s my least favorite necessity. I want to go from sunrise to sunset, every single day, living a life with no breaks, forever.

JF: What’ve you been doing since VCR Love?

DL: VCR Love was published last October by Original Works Publishing. I’ve done three other solo shows since VCR Love: Spermicide (a look at despicable, depraved and strange men in America circa right now), No Oddjob (a multimedia-filled show about how video games are art, how they represent those in marginalized demographics, and the culture wars around them) and Birthright (about where propaganda and having a fun time intersect).

JF: Was there a specific series of events, or moments, which inspired you to create this show?

DL: I’ve struggled with sleep since I was a little kid. It’s hard for me to find closure at the end of my days. Over the years, I’ve spent the hours when most people are participating in their “mandatory eight hour death periods” to mediate on stuff like Saturn’s moons, the Mars Curiosity Rover and the WTF-inducing final 15 minutes of 2001: A Space Odyssey.

David Lawson
Insomnia in Space
Presented as a double-bill with Meredith Sonnen and Lena Barnard’s Casablanca by Gaslight
Home near the corner of 18th and Wharton
June 20th, 7:30 pm
RSVP: davidtrevorlawson@gmail.com

There’s no excuse not to catch SoLow veteran Ellie Brown’s newest piece. It exists in your house, it’s on your cell phone, it’s coursing through the air above us and bounding from rooftop to rooftop. And you can watch it in your pajamas. 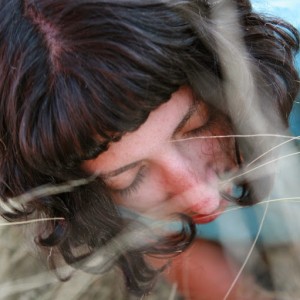 JF: Tell me a little bit about the process for Are You the One?

Ellie Brown: I placed an identical ad in every [Craigslist] category (MSW, WSM, MSM, WSW) looking for “the one.” I asked people to send me a photo of their favorite thing.  The responses and photos are what I got in return.

The performative aspect is from my computer voice, Ava. She’s a great actor and doing a great job portraying the responses in a neutral voice to preserve their anonymity.

I’m having a wonderful time reading the responses, the content, seeing the photos of what people love and in some cases, cringing at what I read.

There is one I’m sitting on right now that is really pornographic. It would make a great sound piece, but I’m not sure I want it on my website.

JF: Last year you did your first theatrical piece, Dear Diary, Bye., in SoLow. Then you took it to Plays and Players after an indiegogo campaign. How did that change your attitude toward theater and performance?

EB: While I was doing Dear Diary, Bye. I felt a little bit like an outsider in the theater club, even though I was making theater. It was a play I needed to make and I’m so thrilled with how it turned out, however I was disappointed in how difficult it was to get people to come out to a show from someone they’d never heard of. This reminded me that while, as an artist, I can work in whatever media fits the message, I am at heart a visual artist.

JF: What makes this piece different from anything you’ve done before?

EB: This is my first piece using a computer lady, craigslist and the web. My work almost always has a physical outcome, but hey- this is 2014 and we’re all online.

Are You the One?
Ellie Brown
Online: elliebrown.com
Ongoing