After the repeated success of its one-man RFK, New City Stage Company revisited other eras of presidential history this season with Hinckley and Frost/Nixon. From May 16 to June 8, the company concludes its look at the American political summit with a series of (FREE!) staged readings at the Adrienne Theatre Skybox. 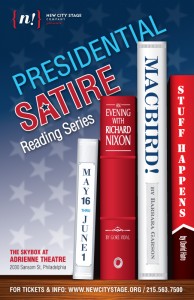 The three-play Presidential Satire series begins May 16-18 with Barbara Garson’s MacBird!, a 1967 play which sees First Lady “Lady Bird” Johnson become a Shakespearean “Lady MacBird” in the aftermath of JFK’s assassination. The following weekend features a presentation of Gore Vidal’s An Evening with Richard Nixon (May 23-25), which uses actual quotes from the disgraced president to form its wry humor. May 30 to June 1 finds the New City crew mining more recent history with David Hare’s Stuff Happens, a title inspired by Donald Rumsfeld’s response to looting in Baghdad during the last Iraq War.

Curated by Sam Sherburne and Sarah Scholl, each of these rarely produced works is directed by a young up-and-coming Philadelphia. They feature a repertory cast of New City Stage alums and other local actors, including Ross Beschler, Kimberly Fairbanks, Joe Guzman, and Mary McCool.