In Lucidity Suitcase Intercontinental’s production, three actors and a pianist tell the story of the last three months of Edgar Allen Poe’s life as he pursues his phantoms and vice versa in Philadelphia, Baltimore, and on midnight trains. 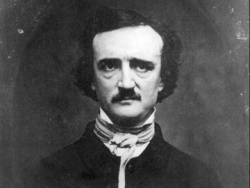 In snatches of letters and in dream occurrences laced with alcoholic meditations, the probably brain damaged Poe hallucinates the elusive Virginia, his late wife, muse, tormentor, and angel. A third actor is a combination park ranger, train conductor, singer, hotel manager, clarinetist and anything else the production demands.

The ingeniously designed production utilizes the stage in Plays & Players Theatre brilliantly, while manipulating an all-in-one train/door/booth/table/bed construction and creating performance spaces as it goes along.

In a letter to his aunt/mother-in law, written not long before his death, Poe expressed the thought that he could die now, since his Eureka, an essay in which he figures out the universe, has been published. In this interior tale of the end of EA Poe, the little-known treatise looms larger to him than his poetry, horror stories, or even his wildly successful The Raven, which has become a subsistence-cash cow, autopilot recitation.

Thaddeus Phillips and Jeremy Wilhelm collaborated with the other Wilhelm brother, David (music), Geoff Sobelle, Tatiana Mallarino, and Charlotte Ford in the current production. They also acknowledge others who worked on past manifestations of this theme. Together they playwrighted this piece. Rather than written, it is surely ‘wrighted’ as shipwrights construct ships and performance artists craft theatre.

The first act is flawless. The second act suffers from just a touch of dreaded and typical second act drag that dissipates in time for a strong finish as Poe dies in a Baltimore hospital in a masterful piece of theatre expressed with mirrors and sound from piano wires.

It is wonderful that theatre like this is happening in the Live Arts Festival.  A fascinating show that steps outside traditional play boundaries from the very start, Red-Eye to Havre de Grace is a work of art. Closes shop on 9/17/05 with a post-show discussion. Reviewed by Kathryn Osenlund for CurtainUp.com