There is something appealing about short theater. A ten to thirty minute play can be unapologetically funny, without aiming for emotional depth or bothering with character development. Watching Christopher Durang’s BEYOND THERAPY, now in a Philadelphia production by Fever Dream Repertory, is like watching a series of interlinked comedy sketches. It may lack the depth or arcs one usually expects of a full-length, but the script retains the fast-paced humor of good short theater. 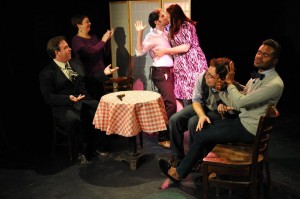 Prudence (Kathryn Roper) meets Bruce (Dustin Karrat) on disastrous blind date (“you have lovely breasts,” Bruce says by way of introduction) and each retreats to a therapist to rehash its details. Their therapists are crazy and ineffectual in different ways. Stuart (Michael J. Tait), Prudence’s therapist, would rather be dating her himself. Charlotte (Nancy Segal), Bruce’s therapist, is self-focused, scatterbrained, and unrealistically forgetful (“Maybe my dirigible knows,” she says, forgetting the word for “secretary”), and encourages her client to go on another date despite his commitment to a live-in boyfriend, Bob (Sean Cummings).

Like in many short theater festivals, the scenes are uneven. Karrat is energetic and physical, but seems restrained by static direction (just because people generally stay seated in restaurants and psychologists offices doesn’t mean they have to in stage portrayals of such). Segal’s humor is dry and well-timed, but though she and Karrat share chemistry, theirs is just one of the first four scenes, and director Gary L. Day keeps the pacing unnecessarily slow for much of the first act.

The show rises in pace and comedic intensity with Cummings’s on-stage arrival as a jealous boyfriend, a dramatic personality who has extra drama forced upon him. His scene with the heterosexual couple whose love is burgeoning before his eyes marks the highlight of the show. Cummings made a similar stage-stealing appearance in Hellafresh Theatre’s recent AUTOMATIC FAULT ISOLATION, and his arrival changes the tempo and atmosphere of BEYOND THERAPY to the better. Shamus Hunter McCarty is also welcome as Andrew, a waiter who finds chemistry with Bob.Durang’s dialog is littered with references to literature—Chekov and Peter Shaffer—but the humor remains more low-brow (e.g., shouting “Cocksucker” at a homosexual). Still funny, in a lightweight Woody Allen sort of way, though somewhat dated in its misogynistic jokes, sexual politics, and cultural references. When the pacing picks up, Karrat’s manic energy shines through and Cummings’s uplifting presence give the show legs. Though perhaps under-rehearsed on opening night, the production grew in confidence as the night progressed.

The Arden Theatre’s production of FREUD’S LAST SESSION (opening November 1) promises a more contemplative look at the field, but BEYOND THERAPY is no couch potato. Ha! October 26-November 10, 2012, facebook.com/feverdreamrep.