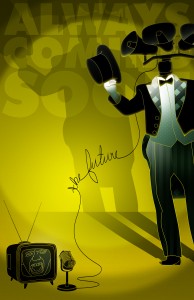 Being born into late twentieth century Western civilization might make us the luckiest humans ever to live. We have all the advantages of advancements in medicine, technology, and secular liberalism, and the disadvantages of diminishing resources, environmental degradation, and inevitable nuclear destruction haven’t yet caught up with us. It will just get worse from here. As Leonard Cohen says, “Give me back the Berlin wall/ give me Stalin and St Paul/ I’ve seen the future, brother:/ it is murder.”

In ALWAYS COMING SOON: THE FUTURE, BRAT Productions takes another look at what the future holds, and the auguries are not pretty: Derelict clowns, aggressive barkers, and obscene control culture. But THE FUTURE is funny and fun: It’s another of the entertaining rock cabarets which the company has launched in recent years, and a recent preview at FringeArts Scratch Night was peculiarly hilarious. Phindie asked composer Peter Gaffney about THE FUTURE (dang, we forgot to get his World Cup predictions).

Phindie: Did you know they’re making a Back to the Future musical. THE FUTURE is going to be pretty much like that, right? Seriously, what do you think of the way “the future” is presented in theater and other arts?
PG: Back to the Future is a funny movie. It’s all about our desperate need for narrative closure. The Michael J. Fox character has to run around making sure that a particular narrative goes the way it’s supposed to. He’s struggling to close a hole in time. A more recent film, Primer, essentially tells the same story. I think our fascination with time travel narratives and sci-fi in general is connected to our deeply rooted fear of time, and to all the ways we try to transcend and control it—not time like on a clock or a calendar, but the continuous re-opening and re-organization of things and ideas, the dice throw inside every moment. We don’t like time. It is always laughing at us.

Phindie: How did THE FUTURE come about?
PETER GAFFNEY: When I workshopped my ideas and music for this show a few years ago, the basic conceit was to use small time theater (live music, carny barkers, strippers) to seduce the audience into a kind of obscene and unauthorized enjoyment of control culture. I think it’s the Marquis de Sade who first thought of doing that. The inspiration for the characters and songs was this simple question: if, one day, the military-industrial complex decided to sponsor a live sex show on public television, who would be its spokespeople? I started working with Jess Conda and BRAT Productions a few years ago—it was Jess who pitched me the idea of pairing that material with bouffon work.

Phindie: Could you tell us a little about bouffon and how you came to it?
PG: The bouffon is a timeless figure—court jesters, Commedia dell’Arte, Carnaval. Maybe even silent film era slapstick. Shakespeare was inspired by bouffons when he wrote the drunken trio Caliban-Stephano-Trinculo into The Tempest. But the bouffon figure is something worse than irreverent, standing outside orthodox culture, abject and deformed, and finding constant delight in laying waste to our most cherished practices and values. Jess and some of our other collaborators have a wealth of experience to draw from in this regard, having just graduated from the Advanced Performance Training program at Pig Iron, with its roots in LeCoq and French bouffon techniques.

Phindie: What were some of the other influences?
PG: I was really into Nina Hagen and David Bowie when I created these songs and the characters who sing them, although what came out of it sounds a little more like the soundtrack of a nightmare, with lots of accordion and a goose-stepping chorus line. The musicians have brought in their own diverse palette of electro-acoustic techniques, including home-made sound filters and a Micromoog. As far as the dramaturgy goes, we have been working with some really amazing actors to devise the piece, a process that took us inadvertently into the world of Samuel Beckett and Sarah Kane—two playwrights who have always so richly deserved a musical theater treatment. 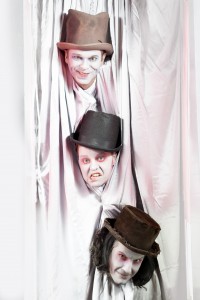 Phindie: Nice, I could see BRAT doing a musical version of [Kane’s] Blasted! The company has such a wide-ranging, energetic approach to theater making. What do you like about working with BRAT?
PG: I love BRAT. They’re version of Ionesco’s Bald Soprano (directed by Madi Distefano) is one of the most extraordinary theater experiences you’ll ever have. Incoming Artistic Director Jess Conda has brought her own relentless rock-and-roll energy to the company, and a truly unique brand of storytelling to go with it. But BRAT has always been committed to a certain kind of experimentation, coupling diverse techniques, concepts and genres together (like we saw in their production of Brian Grace-Duff’s Last Plot in Revenge) and seeing what kind of baby will come out. This gives their work a special energy, one that turns on a dime from devil-may-care showmanship to something very serious at the heart of live performance, something more conventional theater lost a long time ago.

Phindie: The show is directed by BRAT resident artist Scott Sheppard. How did he shape the play?
PG: Scott’s a wizard. He juggled many ideas at once and transformed them into on-your-feet play time for the actors. Then they did the hard work of creating material in real time. In this kind of process, which draws its energy precisely from having too many cooks in the kitchen, somebody like Scott is absolutely essential. His whole being and presence speaks to a deep patience and intelligence combined with lightening-speed wit, and the fairly unique ability to bring people along with him from one joyful discovery to another. If Scott ever decided to start a cult, which he wouldn’t, I’d be the first to drink the Kool-aid.