DYNAMO: There’s no such thing as douchemachines.
POOKIE: Do you mean deus ex machina? 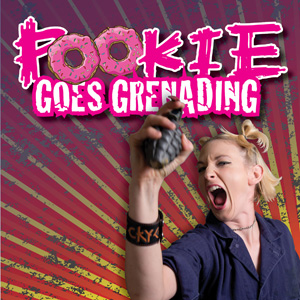 As the play opens, punked-out 14-year-old Pookie (Mary Tuomanen) is describing in lavish detail her idea for an action movie, starring Pookie as a Krispy Kreme conquering, grenade-toting warrior. “Tell me that’s not going to win an Oscar,” she says to her BFF, a pudgy Latino teenager named Dynamo (Eric Scotolati). “Yo. I dunno. That seemed kinda stoopid.” he responds.

But Pookie is sure in her vision, confident that using doughnuts as a metaphor for the “loneliness of contemporary life” is profound rather than facile, excited by the magic of theater, and sincere as only a teenager or independent performance artist can be. She seeks the unwilling advice of guidance counselor Larry Ragonese (Brian McCann), who struggles to comprehend Pookie’s enthusiasm and unwanted sexual advances.

Pookie’s attempt to “transform this school auditorium into a vivid landscape … of really awesome things” results in fire and serious injury. She goes into hiding to plan her magnum opus, along with a ragtag cast: Dynamo, his popular pretty-boy boyfriend Benny (Jamison Foreman), the best techie in town (Brandi Burgess), and a kidnapped Mr. Ragonese.

This brief description does little to capture the outrageous energy of POOKIE GOES GRENADING in the direction of Kevin Glaccum. It’s absolutely joyful to watch such scenes as Dynamo and Pookie’s jailhouse rendition of “Total Eclipse of the Heart”, Dynamo’s explanation that he is dating Benny after he has tried asking out every girl in the school, and McCann’s series of exasperated expressions as a tied-up prisoner forced to take part in the naive extravaganza. The laughs come in quick progression, and only a few fall flat (this viewer did not like the questionable use of a quadriplegic “African exchange student” as the butt of repeated jokes).

Tuomanen is as excellent as an over-energized teenager as she was as the unlikely lead of Philadelphia Shakespeare Theatre’s HAMLET. Scolati will be well known to West Philadelphia audiences after great turns in several leads at Curio Theatre (in ROSENCRANTZ AND GUILDENSTERN ARE DEAD and GREAT EXPECTATIONS, among others). With unbridled performances like this as pathetic hip-hop wannabe Dynamo, he is sure to garner increased recognition this side of the Schuylkill.

J.C. Lee’s plays were the focus of an entire season by San Francisco’s Sleepwalker’s Theatre (which was cofounded by John Rosenberg, now at the helm of Philadelphia’s Hellafresh Theatre). If POOKIE GOES GRENADING is any indication, I wish a Philadelphia company would do the same. This is a must-see for anyone in the industry, and sure to entertain general audiences. October 31–November 18, 2012, azukatheatre.org.