Published on the FringeArts blog. Reprinted by kind permission. 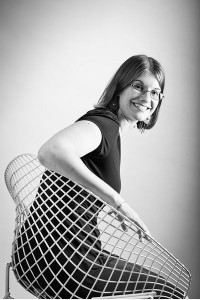 “It’s kind of an apocryphal story,” Adrienne Mackey says about being in a bar with some friends, agonizing over what to name her company, and finally asking the waitress for advice. “In my memory, she said, ‘There’s a beer called Swim Pony. That’s kind of a funny name, that’s what you should name it.’ Nobody else remembers this happening, and as far as I can tell, that beer does not exist. So I don’t know if I had some strange, out-of-body hallucination that gave me the name, but that’s how I remember it being created.”

Adrienne Mackey, 32, is the artistic director of Swim Pony Performing Arts, a performing arts company that prides itself on presenting work that is “loud, strange, and never seen before on earth.” I caught up with Adrienne at Chapterhouse Café & Gallery where I found her working on her fourth cup of coffee and wearing a long flowing turquoise skirt, knit grey cardigan, and glasses. This artistic director/professor/fearless feminist proponent was wrapping up an administrative meeting. On the table, her laptop, planner, and handwritten daily to-do lists—full of highlights, crossed-out lines, and scribbles—were stacked neatly in a pile.

In additional to her Swim Pony work, Adrienne is an adjunct professor at Drexel University and Rutgers University-Camden. Still, she’s consciously trying to move away from her previous “goal” of working at every possible minute of the day while transitioning from an emerging artist into an established, early mid-career one. She acknowledges that even if she can’t do everything that she wants to do right in this very moment, she can work toward various projects—all currently in the Philly area.

Adrienne has been interested in long term artist sustainability and how she can maintain her creative career over a lifetime. Balancing her hectic schedule while being financially secure and following her creative passions, but without experiencing burnout, is important to her. Because of this, she feels a responsibility to the artists she works with versus the objects she uses: when budgeting for Swim Pony, she puts people above things.

With funding from the Knight Foundation, she created Cross Pollination, a project aiming to unite artists of different disciplines. Approximately thirty to forty candidates will be partnered with other candidates to go on a “first date” to talk about their work and to see if they’re a good artistic match for each other. Eight pairs will be chosen by Adrienne to further will discuss and explore their artistic products and creative processes during a paid week-long residency.

“People who may not live in the foundation art funding world are the people I’m especially interested in,” Adrienne says. “What does a dancer have to learn from a painter? How do you rethink about movement through the lens of somebody who makes a static piece of art and vice versa? It’s a chance to put people in a room together for a week and think about how you make stuff and whether the assumptions you make about your genre are ones that you want to continue making.”

For her own work, Adrienne is trying to unlearn specific lessons and narrow-mindedness she says many theater artists possess due to their training—a focus on unifying experience and getting people to understand one thing. She finds that many theater artists work toward the idea of a singularity of experience, and she wants to step away from that.

“I’ve been interested more in the way that I experience visual art which is that there is an assumption of a multitude of responses, and I’ve been trying to come up with works where that is possible rather than saying, “This is the way you have to understand it,” Adrienne says. “Either, ‘Here is a thing, feel lots of ways about it,’ or, ‘Here’s what I think about this, I am interested to know how you respond to it.’”

She finds herself asking questions such as: What if audience members had more choices or responsibilities during a performance? What if the audience became the performers? She began exploring these ideas with Swim Pony’s The Giant Squid, which was performed in lecture halls, allowing the audience to be cast as people who came to see the lecture. The audience became part of the show, playing the audience.

Adrienne has noticed that much of her audience has been garnered by word-of-mouth, and less so to media publicity. This has influenced her to think about her audience, who they are for purposes of participation (as opposed to marketing data), and how she can engage them through performances structured like games. By following situational rules, for example, audience members become active participants in the performance.