“My mom always told me to be careful accepting invitations, but how often does a Mexican lion invite you to a cantina?”

Philadelphia has bright new playwriting talent in Chris Davis. His 1 YEAR AND A DAY, a collaboration with Matt Goldsborough of local music act The Great Unknown, was one of the highlights of the 2012 Fringe. But that was a lighthearted slapdash affair, his one-man show  DRUNK LION, now in a brief run at Quig’s Pub at Plays and Players, reveals a welcome depth of talent. 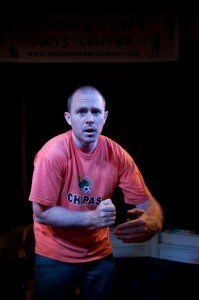 Based upon a year Davis spent studying Spanish in Chiapas, Mexico, DRUNK LION is at turns hilarious and philosophical, surreal and vividly descriptive. In a tightly written 60 minutes, well directed by Mary Tuomanen (and excellently lighted by Maria Shaplin), Davis embodies dozens of characters, eloquently painting a picture of his experience in small town Mexico, with the drunkenness, self-doubt, and imaginative pondering that can come with a shift to a very different locale.

The gringo narrator accepts a drink offer from a drunk Mexican lion (“they are all lions” his host father warns him), and relates to the cat’s thoughts on alcohol (“I’m not saying I had a problem… other people had a problem) and women (“each woman he met was better than the last, like beer”). The action shifts between the magical-realistic plot, direct-address, and looping asides, but remains engaging through changes in tone and setting.

Davis’s performances come close to matching the strength of his inventive script, growing with confidence as he deftly realizes his large cast of characters. Most entertaining are the anthropomorphic title character (who is indeed a dipsomaniacal big cat), the chain-smoking host family father, and the poor narrator transformed into an every-woman Juanita.

Fittingly, DRUNK LION is bilingual in English and Spanish, with the Spanish translated in the action. Although at times the translation comes at the expense of the pacing, Davis successfully navigates a difficult line between over-translating and leaving his Anglophone audiences confused. The show feels like a journey; one we are thankful to have taken.

“If you are careful you can even hear the love at the very depth of a drunk’s voice. It’s always there, and even though they’re annoying as shit you can hear it if you listen closely.”

3 Replies to “Sharing a Cerveza with THE DRUNK LION”