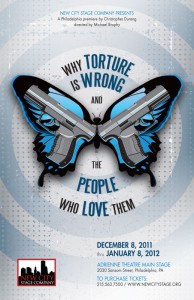 Judging by the enthusiastic response of the opening night audience, New City Stage Company has struck a reverberating chord with its production of Christopher Durang’s screwball comedy on terrorism, WHY TORTURE IS WRONG, AND THE PEOPLE WHO LOVE THEM. Not your usual holiday pablum, the dark and zany farce offers theatergoers a much-needed release, through laughter, of their pent-up tensions over America’s current politics and “homeland insecurity.”

Durang’s absurd parody is chock-full of hilarious indictments of paranoia, racial profiling, anger, violence, military tactics, government cover-ups, the Second Amendment, and other relevant socio-political issues that plague our country today, from date rape to unholy men of the cloth, to foreign imports, abortion, and euthanasia.

In the play’s opening scene, Felicity awakens to a hangover and a stranger in her bed, following an encounter at Hooters the night before. She comes to realize that she was drugged and then wed to the shady Zamir (who claims to be Irish, but appears to be an Islamic terrorist), in a ceremony presided over by the Reverend Mike, a creepy minister and former drug dealer turned pornographic filmmaker. When she brings her new husband to meet her parents and to ask their help in having her marriage annulled (against Zamir’s wishes), total insanity ensues.

The superb group of talented actors, under the able direction of Michael Brophy (in his return to New City Stage after directing the company’s powerful 2009-10 production of WHEN YOU COMIN’ BACK, RED RYDER?), delivers the requisite lunacy and volatility to Durang’s characters. Paul L. Nolan is hysterical (both psychologically and comically) as Felicity’s politically incorrect father, spewing hatred and bigotry, but cooing over unborn fetuses, waxing lyrical over his extensive collection of butterfly specimens and guns, and reveling in the covert missions of his batty shadow government—all with a Reaganesque sensibility of early dementia. Marcia Saunders is equally splendid as his escapist wife, who yammers incessantly about the theater, wears identical dresses in a range of mood-appropriate colors, and placates her dysfunctional family with French toast (the mere name of which makes her right-wing husband bristle). Sam Henderson is convincingly crazed and menacing as Zamir, who has serious problems with anger management, liberated American women, and telling the truth.

Rounding out the excellent ensemble are Russ Widdall as the stoned and morally challenged preacher; Sonja Robson as the ditzy spy who suffers a recurrent panty malfunction; Ed Swidey as the Voice, who transmutes into a waiter and then a secret agent in the covert operation, delighting in Zamir’s torture while fanatically mimicking Looney Tunes characters; and the company’s founder and Artistic Director Ginger Dayle, who displays her refreshingly natural style of acting and innate comedic timing as Felicity. No one does madcap socio-political theater better than New City Stage.

Written by Durang (a Bucks County native) in 2009, in the aftermath of Abu Ghraib and in the midst of America’s unending involvement in the Middle East, WHY TORTURE IS WRONG, AND THE PEOPLE WHO LOVE THEM will have you howling, as well as questioning the sanity of our elected officials, national security advisers, and the growing reactionary fringe of our voting populace (if you don’t already). It should also leave you wondering if making an effort to understand people of different cultural backgrounds–rather than fearing, threatening, and attacking them–might not result in a completely different scenario for the future of the world. Seems simple; might be worth a try on all sides.