He may be the quintessential 1980s playwright, but Christopher Durang is an enduring writer. His Vanya and Sonia and Masha and Spike won a 2013 Tony and just received its Philadelphia premiere at PTC. New City Stage Company has also had recent success with Durang’s Miss Witherspoon (2010) and Why Torture is Wrong, and the People Who Love Them (2011). 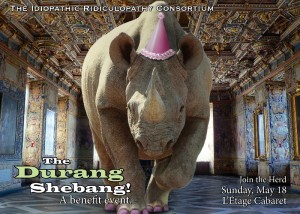 Durang’s 1980s classic, Beyond Therapy, seems surprisingly dated just a couple decades later, but it too continues to see local stagings. It’s easy to see why: Durang remains a master of comedy, finding humor even in (especially in?) the bleakest of settings. Watching Durang’s full-length plays can seem like watching a series of funny, interlinked sketches, so it’s no surprise he’s great at the short play. The Idiopathic Ridiculopathy Consortium gives local audiences the chance to see Durang at his comic best in a series of seldom-performed shorts, THE DURANG SHABANG! in two performances (6pm and 8pm) at L’Etage Cabaret, on Sunday, May 18, 2014.

The 70-minute compilation includes: “Mrs. Sorken”, the evening’s hostess, expounding on an evening at the theater, performed by Sharon Geller; “DMV Tyrant”, an all-too-familiar escapade of a man trying to renew his license at the DMV, performed by David Stanger and Kristen Norine; “Diversions”, written by Durang at age 18, features a cast of 10. Durang writes: “…(“Diversions”) has a young person’s place of existentialism…it is also drawn to absurdism, which I seemed to know from Edward Albee’s The American Dream, and maybe from some Fellini movies…”. Also included in the evening of seldom-performed one acts are “Kitty the Waitress”, featuring an unusually friendly feline waitress, and “Canker Sores and Other Distractions”, a marital reconciliation gone awry.

Several of the SHABANG’s cast members will also appear in the IRC’s production of  Eugene Ionesco’s classic Rhinoceros, part of the 2014 FringeArts Festival, running September 3-21, 2014, at the Skybox at The Adrienne. Proceeds from THE DURANG SHABANG! will fund this production. [L’Etage Cabaret, 6th and Bainbridge Streets] May 18, 2014, idiopathicridiculopathyconsortium.org. Get Tickets Here!