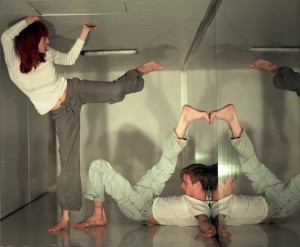 What happens when you combine Philadelphia choreographers with dance makers from across the country, give them less than 10 hours to remix and recreate each other’s works, and ask them to show their creations? We’re about to find out.

The Remix Festival, curated by Annie Wilson and Susan Rethorst, is inspired by Susan’s choreographic technique of wrecking­—basically radically taking apart a finished work and reconstituting into a new form—and The Wrecking Project. I spoke with Annie about her involvement in the festival, which has performances May 1st through May 4th at thefidget space, 1714 North Mascher Street in the Kensington neighborhood of Philadelphia.

Annie was inspired by the Deborah Hay Festival that Nicole Bindler organized in partnership with Mascher Space Cooperative and <fidget>, and that both venues are committed to DIY presenting of experimental dance and performance. To have these two neighboring studios as tandem hubs of dance experimentation for five days is an exciting prospect for this thriving arts community.

Choreographers premiere original works as well as “wrecking,” remixing, and showing new variations of a fellow choreographer’s dance. Artists get six hours of remixing time with each dance over the span of two days before performing. The idea is that this isn’t enough time for choreographers to second guess themselves, but is enough time to make deep structural changes to their remix partner’s work, if they feel so compelled. <fidget> is an ideal space, according to Annie, because it’s the only venue in the city that is also a home; the transition between watching and talking about a dance to hanging out is slim. Philadelphia choreographers include Susan Rethorst, Gregory Holt, and Chelsea Murphy and Magda San Milan, and the out-of-town makers are John Jesurun (NYC), Jen Rosenblit (NYC), Meredith Bove(DC), and Rachel Slater (Portland, OR).

Conceptually, there is not difference between wrecking and remixing. Annie compared these choreography techniques to remixing in music. “Girl Talk is one of my favorite musicians, partly because he does actually do something different with remixes; he takes bits of songs and recontextualizes them; he makes a new type of music from them. When I was introduced to the concept of wrecking by Susan, it clicked. I loved that it was a way of generating material, and being in collaboration with another artist that wasn’t consensus-based.”

Annie was thrilled when Susan wanted to participate in the festival. Choreographers were invited to bring one dance that they were interested in having remixed for whatever it may offer them artistically. They selected their own dancers. The original work and the remixed version are performed by the same dancers. Many of the choreographers are also the dancers, which throws another ingredient into the remixing process.

To pay for all this art making, Annie has to fundraise $2,100 to produce the festival through Indiegogo, which will cover costs of artist transportation, gas, food, guest speakers, and marketing. Mascher and <fidget> are opening their doors throughout the festival so the artists can work, play, and explore. She says she is confident she will reach her fundraising goal, and any additional funds raised will go directly to the choreographers to compensate them for their time.

Annie says she’d like to discover more about the “choreographic mind” (another term coined by Susan) and how it is affected by geography, age, and level of “done-ness” during The Remix Festival. She is often frustrated by the richness she sees in a dance in the studio or during private showings, but it evaporates once set onstage.

“I am also frustrated by going to watch a dance and feeling the desire for the dance to impress me,” says Annie. “It is deeply saddening to be in a relationship to a dance the way I might be in relationship to a toaster, which is as a consumer. So the festival is a chance to realign the way I and we can watch a dance, as a brief crystallization of a deep process. I suspect the remixed dances will illuminate the edges of the original dances in a way that connects them all in an unpredictable spider web. I want to see that spider web!”

Thank you Annie! We hope you see that spider web!

The Remix Festival
Curated by Annie Wilson and Susan Rethorst