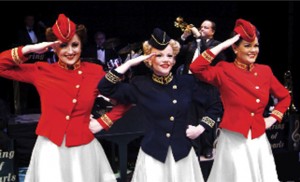 IN THE MOOD is more than a music revue—it’s a concert, a musical, a history lesson, a show of patriotism, and a celebration of one of the most important times in American history. The 1940’s was a time of significant change. In music, the whole nation was listening to the same big bands. Swing music, romantic ballads, and dancing shaped an entire cultural movement and most importantly became a prevailing icon of hope as we faced the reality of World War II. Proudly, the show takes a segment to recognize and honor the veterans in attendance. In its 20th year of touring, IN THE MOOD is an international success.

The show evokes an array of emotions but is mostly sentimental, energizing, and fun. The theater is never quiet and the String of Pearls Orchestra and the In the Mood Singers & Dancers have no problem reeling the audience in to sing and clap along. The set list of favorites is carefully constructed including “Tuxedo Junction,” “Boogie Woogie Bugle Boy,” and of course “In the Mood”. However, the best part about the show is that everyone—from the performers, to the audience, to the theater staff—has a great time. The audience is full of those reliving their youth, the younger generations, swing enthusiasts, and people who simply want to see a darn good show. The feeling doesn’t end when you leave the theater while the orchestra continues to play; outside the theater, the singers and dancers meet the audience for pictures and the producer/music director (Bud Forrest) meets to talk about the music and the show. [Bucks County Playhouse, New Hope, PA.] April 8 – April 14, 2014, http://www.bcptheater.org, http://www.inthemoodlive.com/.