Reprinted from The Dance Journal

A hallow, whistling sounds fills the theater.  It could be a chant, or, then again, the whir of a machine.  Dancers in brightly colored tops face every which way.  Their hands are held in loose fists and their arms slowly float then slice through the air like an airplane’s wings.  They turn at seemingly random intervals, pivoting silently on the balls of their feet.  Eventually, the crowd gives way to a soloist, who spins with all the perfection of an Olympian skater on ice, but then it returns, amoeba-like and all encompassing. 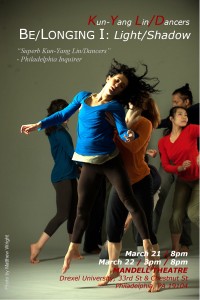 We could be at a yoga studio, or a modern dance class, or even just Whole Foods (which might explain why everyone is so good looking and in such great shape) but the tableau onstage at Drexel’s Mandell Theater is the latest creation of choreographer Kun-Yang Lin.

Be/longing: Light/Shadow is a world premiere based on a summer of research in Indonesia.  It draws inspiration from many elements familiar to fans of the Philadelphia-based KYL/D: martial arts, tai chi, meditation, philosophy, Taoism and Buddhism.  But it is particularly successful in synthesizing both ethnographic and somatic strands of research—and in turning the results of this research into a stunning display of technique and artistry that transports the audience into another place, and ultimately into themselves.

It’s not unusual, at least in my opinion, for art that focuses too much on process to suffer a bit in the actual performance department.  Sometimes the result is narcissism; sometimes the result is ambivalence or even an intentional ignoring of the audience.  But such is not the case with KYL/D.

Dancer Jessica Warchal-King emerges from the group, both physically and technically, early on.  She kicks backwards ferociously like an enraged farm animal, then dives into a fluid back roll, pausing on her shoulder with one leg in the air before flicking her foot at the audience.  She dances like a rubber band: strong, flexible, capable of creating just about any shape, yet always ready to snap.

Liu Mo also captivates the audience with his low spins and athleticism but it is collaborating artist Hua Hua Zhang, a master puppeteer, whose eerie solo brings the greatest emotional depth to the work.  Her performance is only technically a solo; she wears a long brown shroud and carries a blank white mask.  At first she is the mask, then she dancers alongside the mask.  There are caresses and embraces, but also struggles and suffocation, reflecting the many complexities of both inter and intrapersonal relationships.

Lin’s inquiry-as-practice method comes to fruition as the work, which is presented as a single dance without an intermission, unfolds.  Partnering sections challenge conventional male/female pair ups and the women of the company do just as must heavy lifting as the men.  A cotton-candy colored sunset fades into black and dancers pierce this darkness with tiny votive candles and an arrangement of the Ga Te Mantra inspired in part by Lou Harrison’s La Koro Suto.

Motifs grow; the dancers clump together and root down into an expansive grand plié, heels lifted.  They pull their knees together and bow forward.  At one point, the audience is taken through a guided meditation.  Most are hesitant at first; they glance nervously over their shoulders to see if anyone else is actually holding their hands to their stomach or rubbing their palms together but by the time the word concludes with a spiraling of light over the audience, it is clear that Lin’s work is an act of selflessness, an act of love.  The dance—even as beautiful, unexpected and breathtaking as it is— is just a medium for communication and we are all invited to take part in the conversation. March 21-22, 2014, kunyanglin.org.