“Anything’s possible in a world where media rules all.” 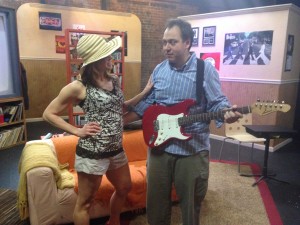 In 1981, John W. Hinckley Jr. fired into president Ronald Reagan’s entourage, hitting four men, including the president. Reagan’s press secretary Jim Brady was stuck twice in the head and permanently disabled, and Reagan himself was hospitalized for two weeks by a shot to the chest.

What’s interesting about Hinckley, as Reagan’s son Ron said in an interview a few years ago, is that his attempted assassination on the president had absolutely nothing to do with politics. It had everything to do with his personal fears, insecurities, ambitions, and obsessions.

These psychological pressures are the focus of New City Stage’s HINCKLEY, created by New City artistic director, Ginger Dayle. This brusque and surprising comical production is set in a realistic representation of a normal 1970’s kid’s bedroom, where hallucinations of Jodie Foster, John Wilkes Booth, Robert DeNiro and Lee Harvey Oswald come to visit a young Hinckley. Without a single scene change and little rearranging of furniture, we explore the would-be assassin’s life from his disturbed, distracted childhood, through his crime and subsequent acquittal on thirteen felony counts (on grounds of insanity), to his present in St. Elizabeth’s Hospital in Washington, D.C.

It’s a lot of material, and whenever possible, Dayle goes for Warholian lightness, showing a talent for furrowing out jokes wherever possible. Rare introspective pauses focus particularly on Hinckley’s opaque insanity and his parents’ familial struggles, both in bringing up John and dealing with his crime.

Hinckley, played by Sam Sherburne, is seen as the lonely, delusional, sick, and consistently frustrated young man he was, who turned to crime to draw attention to himself—a man who, after a long struggle with anonymity and failure, gloried from his hospital cell in his rise to the status of cultural icon.

Indeed the ramifications of the cult of celebrity, which became an obsession for Hinckley, is the main subject of this piece. That’s why it’s curious when long passages voiced by Hinckley’s parents dominate the play’s denouement, championing their personal cause of mental health reform—a cause they took up in response to Hinckley’s acquittal and confinement in St. Elizabeth’s. In contrast, completely voiceless is the true victim of Hinckley’s crime, the paralyzed Jim Brady, now a staunch advocate for gun control.