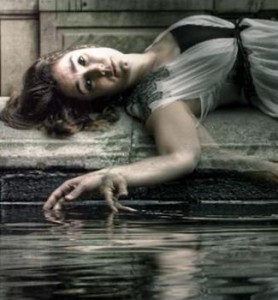 Henrik Ibsen’s name is so thoroughly canonized in theater history that it’s easy to forget just how progressive the man was as a playwright. Works like A DOLL’S HOUSE are rightly granted that particular reverence reserved for works that pull the veil off some previously unspoken truth, but that legacy has come to define Ibsen as a politician of the stage. For all his artistry and craftsmanship, the mutton-chopped Norwegian is understood less as a savvy wordsmith than as the first in a line of forward-thinking liberals that includes Clifford Odets, Arthur Miller and Tony Kushner—playwrights whose natural talents are often viewed as secondary to their use of the stage as a soapbox. (I concede that, at least in the case of Odets, this view is not entirely erroneous.)

For that reason, a production such as EgoPo’s mounting of THE LADY FROM THE SEA is a welcome reminder that, while Ibsen’s view of gender politics was certainly advanced, his stories could also be just plain trippy. Ibsen was a keen psychoanalyst before such a word existed, and this 1888 play shows him dissecting his characters with both a physician’s detachment and a Freudian’s insight. Lovers are bound together with ties stronger than the mighty sea, and brutes both male and female are driven by desires and hatreds as complex and chaotic as any human psyche would allow.

Director Brenna Geffers has a firm grasp of Ibsen’s mental gymnastics and wisely gives them room to breathe in this raw, bare production. The dimensions afforded by the space at Christ Church Neighborhood House allow the silver curtains surrounding the set to reach high into the sky, and it is as if the entire play floats on a storm cloud. The curtains are sheer when they receive the light, giving the stage extra depth so that mystical figures haunt the background while the action onstage pushes forward. This is a delicate device which Geffers smartly uses only when it’s helpful. In one scene, our heroine (Genevieve Perrier) relates a story of lost love to her husband (Ed Swidey). Such scenes belong to a time before audiences lost their patience for heavy-handed verbal exposition. Geffers recognizes this and uses the translucent curtains to show actors pantomiming the story that’s being relayed by the protagonist in the foreground. In the hands of lesser artists, this gimmick might have been a distraction, but here the pantomime and the action onstage play as one, and Geffers succeeds in deepening the stage while not pulling the focus off of the story at hand.

The story is never a simple one, as THE LADY FROM THE SEA deftly balances as many plots and subplots as a modern soap opera. Perrier plays Ellida, the second wife of Swidey’s Doctor Wangel. The nuance of their relationship is at first understood through Wangel’s daughters, Bolette and Hilde. Hilde—the younger daughter—loathes Ellida for her sin of not being the first Mrs. Wangel (who died some years before the play begins). She’s played by Lee Minora, who takes such sick, thrilling pleasure in Hilde’s vindictiveness that she steals almost every scene she gets with kleptomaniacal glee. Bolette (K.O. DelMarcelle) is more strong-headed; her loathing is reserved for the Norwegian countryside in which she is trapped, and DelMarcelle expertly balances the maturity of an older sister with the whimsy of an idealist who wants to see the world but who may not be prepared for the darkness and uncertainly she’ll find there.

True to Ibsen’s feminist legacy, the men here seem like abandoned puppies scurrying in search of whatever uncomplicated love they can find. Swidey seems born for his role as the schlubby cuckold, and although he often seems intellectually outmatched by Perrier’s Ellida, his persistence proves as endearing as his initial obliviousness. Ross Beschler plays a schoolteacher who falls in love with every woman he sees, yet cannot convince anyone to take him seriously as a sexual entity. The most adorable and pathetic of the crew is Lyngstrand (Kevin Chick), an aspiring and asthmatic sculptor who holds a kindhearted, chivalric view of love that proves incompatible with Ibsen’s reality, which portrays love as a competitive, cutthroat affair.

Geffers’ only mistake is a reluctance to use her red pen to trim some of the heft from Ibsen’s play. Even with the wide open space and sparse design, the text sometimes feels too fat to fit into the room. Colleen Corcoran makes a valiant attempt at a character who seems to have been abandoned by the plot. She plays Ballestad, a painter whose main function is that of a screen onto which Lyngstrand projects his charming awkwardness. In Ibsen’s text, Ballestad’s role is written for a man, and perhaps that’s the biggest takeaway from EgoPo’s production: the men in this fjordside town are so impotent that even their words are stolen and put to better use by women.